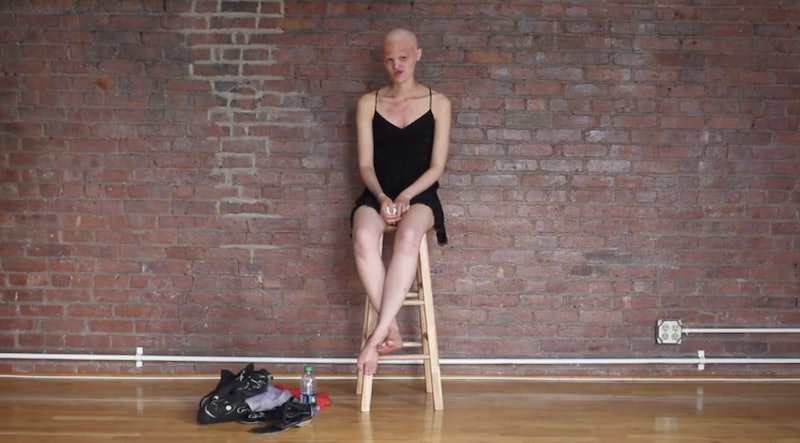 Melanie Gaydos wants people to know that she's not a gimmick. Gaydos is a high fashion model, but until she started posing for photos, she says she never really let many people photograph her. "I only wanted to be photographed by people who I felt understood me, and I never really met too many people that did," she says in an interview for The What's Underneath Project. Gaydos also has a genetic disorder called ectodermal dysplasia. The disorder affects her pores, hair, teeth and fingernails, but is an umbrella term for a slew of symptoms, and not all apply to her.

The What's Underneath Project is an awesome video series that involves an individual being questioned in front of a brick wall. Gradually throughout the interview they are asked to slowly remove articles of clothing. The goal of the project is to reveal that style is more than just the clothes you wear.

Gaydos revealed personal struggles with her family, with an abusive relationship and more, but within the heartache teaches us about loving yourself, being vulnerable, and finding a space to be completely you. She says that when she's modeling she can be completely open, and that it's a cathartic experience for her. Her courage and instinct to rise above the haters and ignore the hurtful things people say is inspiring, to say the least.

Gaydos' video and others in the collection are moving and help to remind us what's important and what makes us unique is what we should celebrate. StyleLikeU's "The What's Underneath Project" is on YouTube, if you want to check out the rest of the inspiring interviews.