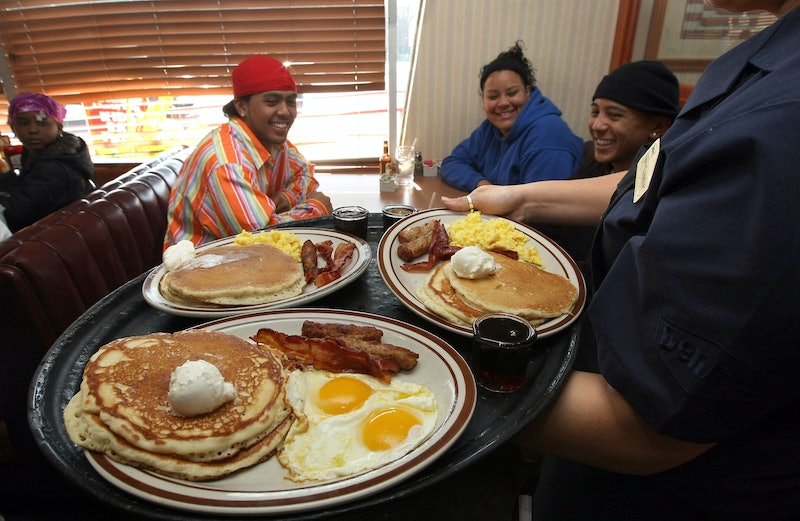 We've been hearing it since our elementary school days, it seems: "eat your breakfast, it's the most important meal of the day!" Well, I hate to shatter your childhood illusions, but a new study suggests that breakfast is not the most important meal, actually, so you should probably stop sweating it. Eating (or skipping breakfast) is unlikely to affect your health, all by itself.

Breakfast skippers burned fewer calories during the day, but did not "make up" for calories missed at breakfast by gorging later.

So, if you're in a hurry and were just going to grab something like a toaster pastry or a donut, you're probably better off skipping breakfast altogether — it likely won't harm your health to forego that morning meal, and may very well help it (as long as you don't eat similar junk food later anyways). Frequent blood sugar spikes will wear out your insulin systems, cause you to gain weight, and eventually give you insulin resistance and even diabetes. This blood sugar instability is part of why empty carbohydrate breakfasts sometimes leave you even hungrier by mid-morning than you were to begin with — ain't nobody got time for that.

Wholesome breakfasts that won't mess with your blood sugar aren't terribly exciting, but they are a safer bet: eggs, minimally-processed breakfast meats, a spoonful or two of peanut or almond butter, and/or some cheese. They may not be "breakfast foods," but I find that leftovers from the previous night's dinner are often more filling and nutritious than the real breakfast choices, too. Think outside the breakfast box: grilled cheese, a quesadilla, a chicken drumstick, a few bites of steak, a handful of jerky — basically anything can be breakfast, and almost anything is healthier than sweetened cereal.

If you are truly in a pinch or just don't feel hungry in the morning, try taking your coffee with some butter (or heavy cream). A fatty caffeinated beverage like this is more satisfying than skipping breakfast altogether and helps you to avoid the pitfalls of intermittent fasting without any blood sugar spike coming out of your overnight fast. Just whatever you do, step away from the donut. You don't necessarily need "breakfast" at all, and especially not in the form of a dessert.