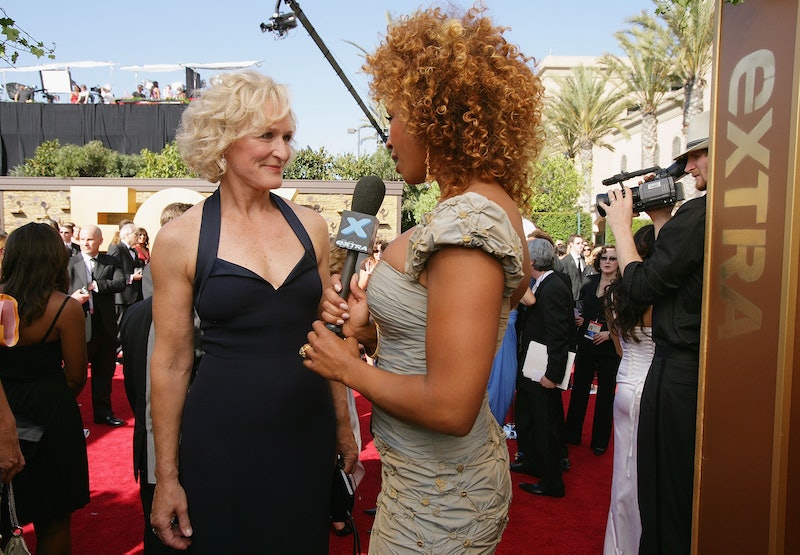 Feel like playing a drinking game in which you replace shots of Jose Cuervo with a gulp of social outrage? If you’ve ever watched an awards show, like tonight’s 66th Primetime Emmy Awards, you’re familiar with the practice of assembling some of the world’s most influential women, offering them a televised platform on which to speak — and then trivializing the opportunity by asking, “Who are you wearing?”

It’s a red carpet question so common it’s become comical, but the not-so-funny part is that reporters shoot-the-breeze with women and idly chat about their satin dresses and sparkly jewelry while men are asked thoughtful, well researched questions about their talent, hard work and perseverance on their projects.

Doth your cup of outrage spilleth over yet? Well, The Representation Project, an organization that exposes sexism and harmful gender stereotypes in media, is on the case. For tonight’s event, the organization is calling on television hosts to check themselves and consciously change the way they talk to women in the pre-show. And it is rallying viewers to raise awareness by Tweeting the hashtag #AskHerMore. (A cheat sheet on its site helpfully lists the Twitter handles of red carpet reporters, like Giuliana Rancic, Ryan Seacrest, and Kelly Osbourne, so viewers can Tweet directly at the hosts.

The campaign is starting to pick up speed. On Collegian Central, Madeline Gallegos, a student at Colorado State University, writes:

As hard as it is for reporters to believe, female celebrities have a lot to say and have just as much talent as their male counterparts. Even though there are separate categories for best actor and best actress, talent isn’t something that is sex or gender specific. Women deserve to be asked about more than their appearance because frankly, they, and women everywhere, deserve to be recognized not simply for their beauty but for their outstanding achievements in their work as well.

"Michelle Dockery, as Lady Mary on Downton Abbey you put up with some terribly sexist attitudes—has that made you more aware of modern-day sexism?"

"Tina Fey and Amy Poehler, you’ve been called the most important comedians working today. What’s it like to be in a brainstorming session with you?"

And now that the pre-show has started, check out what fans are Tweeting about the unfortunately predictable topics broached on the red carpet: