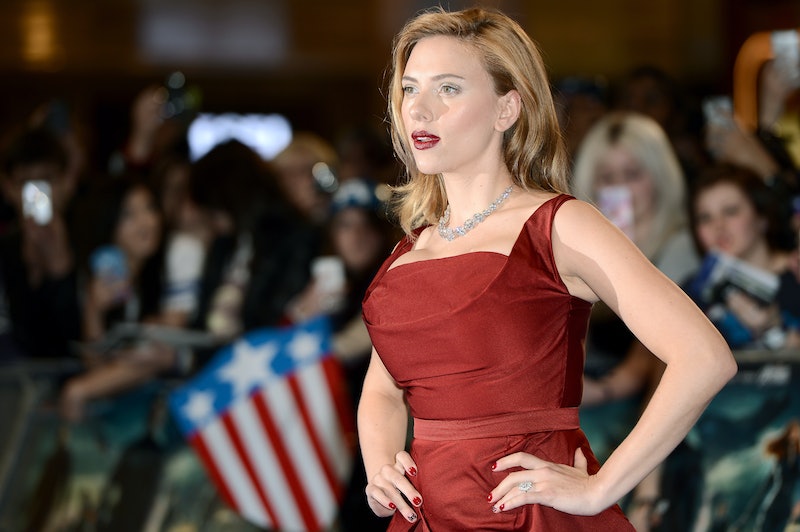 It's happening, maybe: Marvel Studios may be developing a new superhero film based on Scarlett Johansson's Black Widow character featured in Iron Man 2, The Avengers , and Captain America: The Winter Soldier. Variety reports that Marvel Studios president Kevin Feige has had a concept for Black Widow solo movie starring Johansson in mind since 2010, put had to put further development of the film on hold during production of The Avengers. Since then, Marvel Studios has considered the possibility of a Black Widow movie, but the studio has not confirmed any concrete plans for the potential film which has yet to enter active development. However, a deleted scene from Captain America: The Winter Soldier strongly suggests that Marvel is at least thinking about a possible Black Widow movie, which is long overdue given that the realm of superhero movies is completely saturated with male-centric stories.

Should specific plans for development on the film come to fruition, the film already has a potential director. During an interview with Vanity Fair, Game of Thrones director Neil Marshall said he’d “love to do a Black Widow movie". Marshall also described his fascination with Black Widow, who is unique in that she doesn't have specific "superpowers": "I think I’d like to do a big movie with a strong female lead, whether or not she would be a superhero. [...] Yes, I’d love to do a big splashy movie with a great female lead, but it has to be someone I can believe in".

Given that Johansson is currently in the midst of a Matthew McConaughey-level moment, it seems that now would be the perfect time to get the ball rolling on a Black Widow-centered project. Hopefully, the potential project doesn't become another Spider Woman situation and gives us the badass woman-centric action film we've been waiting for.

More like this
Is 'The Woman King' Based On A True Story? The Female Agojie Warriors Did Exist
By Radhika Menon
Lego Just Announced Its 'Black Panther' Set Release Date
By Maxine Harrison
Margot Robbie Breaks Her Silence On *That* Viral 'Barbie' Moment
By Maxine Harrison
Nicola Coughlan Shared A Lady Whistledown Excerpt From ‘Bridgerton’ Season 3
By Grace Wehniainen, Alyssa Lapid and Sam Ramsden
Get Even More From Bustle — Sign Up For The Newsletter