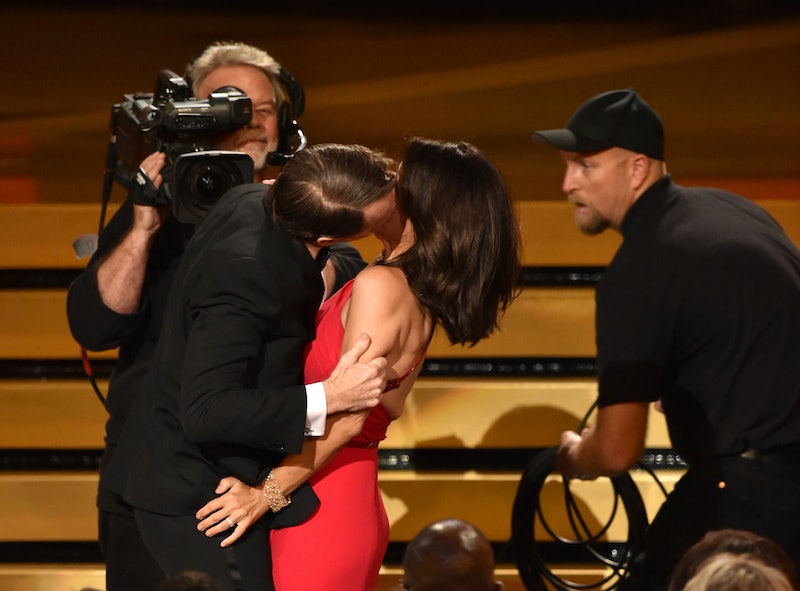 Bless the Emmys. Bless Julia Louis-Drefyus. Bless Bryan Cranston. Bless drama actors with comedy pasts. Bless it all! For Julia Louis-Dreyfus and Bryan Cranston kissed for a while on live TV Monday night, and it was glorious. Thank you, Emmys, for bringing us this moment.

This blessed moment took place in the moments after Louis-Dreyfus was announced as the winner of this year's Outstanding Lead Actress in a Comedy for Veep. As she made her way to the stage, Cranston appeared and... well, then some hardcore macking happened. This followed a bit the two had done onstage as presenters minutes before, in which Louis-Dreyfus failed to remember that Cranston made appearances on Seinfeld way back when as her love interest. As their kiss ended she commented that, oh yeah, now she remembers.

One of the best things about the kiss — other than the kiss itself, which rocked — is that Louis-Dreyfus seemed pretty tongue-tied (pardon the wordplay) in the ensuing moments as she gave her acceptance speech.

I think we know what this means, friends. This is the fates at work, telling us that what the world needs next is a romantic comedy starring these two as lovahs. Or a dark family drama, or just literally anything.