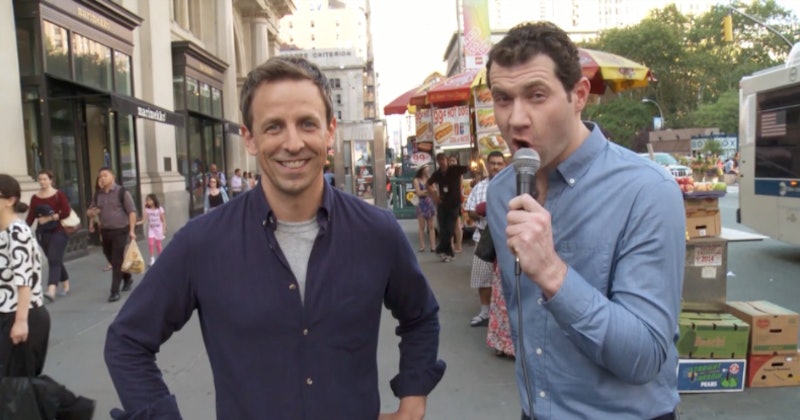 If you don't watch Parks and Recreation, or don't religiously follow Funny or Die, you might be wondering why there was a manic man on the Emmys running around the streets of Los Angeles with host Seth Meyers and asking people if they "feel it" (what "it" is will forever be a mystery). Billy Eichner, who hosts the webseries "Billy on the Street" — and who may be be familiar to you as the Parks and Rec hot head Craig (from Eagleton... yuck) — was invited up on stage to present his newest Emmy edition of "Billy on the Street" where he and Meyers stopped unsuspecting pedestrians and asked if they were upset that The Mindy Project was snubbed (quick answer: HELL YES). Warning to all: brush up on your pop culture just in case you are stopped by a screaming man asking if you think "Maggie Smith doesn't give a shit about the awards."

"Billy on the Street" is actually on its third season. If you aren't familiar with it, go watch every episode on Funny or Die NOW, you will not regret it. Eichner hosts a bevy of stars on the show, usually putting them in ridiculously fast-paced situations that always have me rolling on the floor. In case you missed his Emmy edition of "Billy on the Street" you can watch it here over, and over again.

More like this
Hugh Jackman & Deborra-Lee Furness’ Relationship Timeline Started With A Mutual Crush
By Hugh McIntyre
Zooey Deschanel Can't Be Anyone But Herself
By Samantha Leach
Sadie Sink Would Escape Vecna From 'Stranger Things' With This Taylor Swift Song
By Grace Wehniainen
Who Is 'Stranger Things 4' Fan-Favorite Joseph Quinn Dating IRL?
By Grace Wehniainen
Get Even More From Bustle — Sign Up For The Newsletter