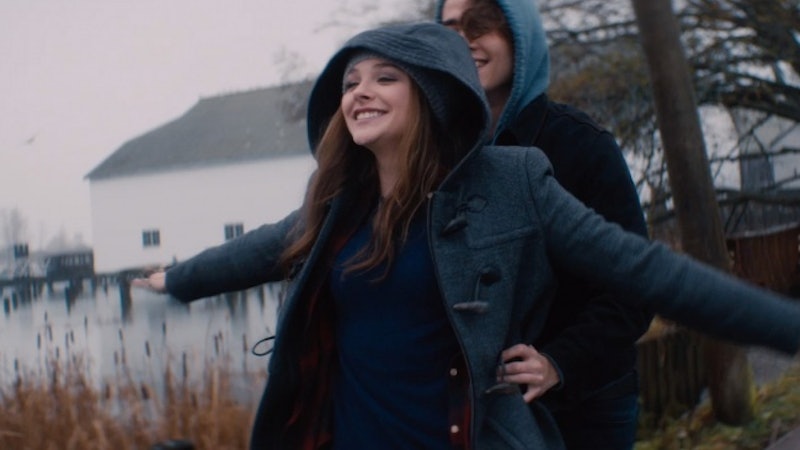 Young adult novel adaptations are a dime a dozen in 2014. And the latest novel to get the big screen treatment is Gayle Forman's weepy If I Stay , a first person tale of Mia, an 18-year-old girl who's life is turned upside down when she gets in a car accident that leaves her in a comatose state. If you've seen the tear-enducing trailer you know what happens next: Mia, who has lost her other family members in the accident, has to decide whether to wake up from her sleepy state or — well, die.

From the likes of the trailer, the movie appeared to hold some weight and genuine intrigue. As a native Oregonian, I also noticed the film's grey-cloaked surroundings. Was this movie supposed to take place in Oregon? I wondered. A quick Google search confirmed my hypothesis, and with this knowledge, had no excuse not to see the summer's Fault in Our Stars-esque followup.

But for any Oregonian who has seen the flick knows, If I Stay paints a pretty hilarious portrait of Portland, Oregon. I've always said the reason Fred Armisen's Portlandia is funny is not because of it's satire, but because it is so truthfully accurate. If I Stay, however, was not. Like it's star Chloe Grace Moretz's perfectly quaffed curls, If I Stay was glossy. Hollywood version of Oregon's most popular city. Here are some things the film got wrong, and a few things they got right.

Perhaps the film was trying to pay homage to Oregon's logging roots, or perhaps they've seen one too many episodes of Twin Peaks, but regardless, Oregonians wear probably as much plaid as any other gloomy state.

Fail: There Isn't That Much Sunshine, or Snow, in Portland — Ever

Portland, like many cities in Oregon, is notorious for it's singular season: rain, rain, and more rain. We get the occasional snowfall — which never sticks — but certainly never as much as the catalyst for Mia's car crash. Also, sunshine? What is that? There's a reason we're all so pale.

Mia's house in the film, a quirky, cool bungalow covered in fun paint colors and adorned in a plethora of greenery. This is awesome, and it actually does represent the types of houses in Portland, Oregon.

Adam's band is called Willamette Stone, which is most likely a reference to the Willamette River that runs through Oregon. While that not-so-subtle shout out is appreciated, it's pretttty hilarious and unbelievable that anyone, let alone Adam's edgy punk rock band, would name their musical compositions after a river. And a stone. I don't get it?

...was awesome. That space he found in an old boathouse was the coolest, and I'm super jealous I can't steal it and turn it into a studio or a tree house. But, like some fans pointed out, a boathouse like that wouldn't exist in Portland. It does look like a spot that could exist in Vancouver, and it turns out, that's where the film was made.

Regardless of the fact that it remained flawlessly curled for the entire film (because car crashes and hospital beds don't effect these things), Mia's hair was always silky smooth. As I mentioned above, Portland, like a lot of Oregon, knows nothing but the rainy season. Maintaining Mia's level of frizz-free locks in the constant downpour would be a sheer miracle.

Portland people love longboarding as much as the next kid, but it's more of a cliche than a reality. Showing Mia and her boyfriend Adam on bikes would have been a much more accurate depiction of the transportation culture.

While this headline might be misleading, what I'm trying to articulate is that the film's lack of diversity was actually a sad, but accurate depiction of Portland, Oregon. As liberal and accepting of a town as it is, most of its residents are middle class white folks. Whomp whomp.

If I Stay is in theatres now. Watch the trailer below: