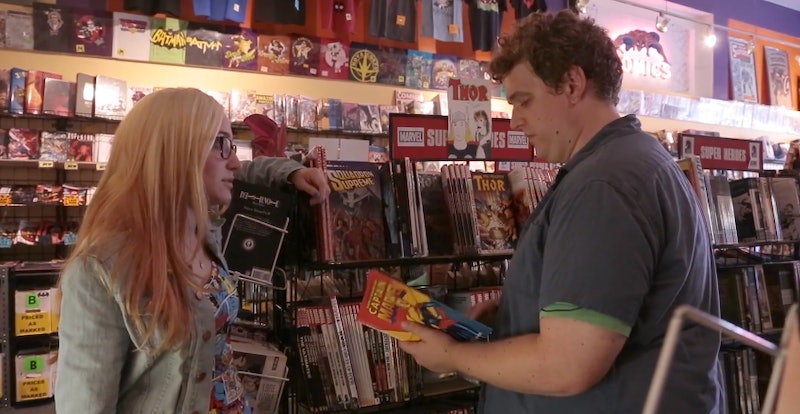 Being a geek can be really great. You get to be unabashedly excited about things, there are so many T-shirts out there that can get you pretty psyched, you know how to engage in debate with the best (and the worst) of 'em — and the list goes on. When you're a geek who also happens to be a lady, though? Things can get a little unnecessarily complicated. If you're looking for a visual representation of these unnecessary complications, allow me to point you to Buzzfeed's video "If Geek Girls Acted Like Geek Guys."

I'm a person who identifies as both a lady and a geek and who happens to love being both of those things. Which is great — until, like many geeky ladies, I come into contact with the rampant misogynistic attitudes way too prevalent in geek culture. "If Geek Girls Acted Like Geek Guys," featuring Gaby Dunn in the role of the geek girl and Dave Childs as the geek guys, does everyone the favor of swapping the roles, exposing the (already obvious but way too common) grossness in the assumptions misogynistic geek culture makes about its female population. Ever been asked if you were into comic books because your brother or your boyfriend got you into them? Anyone ever assume you just went to see The Avengers for Chris Evans' butt? Then this might be cathartic for you.

More like this
Everything To Know About 'Evil' Season 4
By Meguire Hennes
Does 'Locke & Key’s Ending Mean There Could Be A Season 4?
By Sophia Moore
Nicola Peltz Has Addressed Her “Feud” With Victoria Beckham
By Sam Ramsden
'The Simpsons' Will *Finally* Address How They “Predict The Future”
By Sam Ramsden
Get Even More From Bustle — Sign Up For The Newsletter