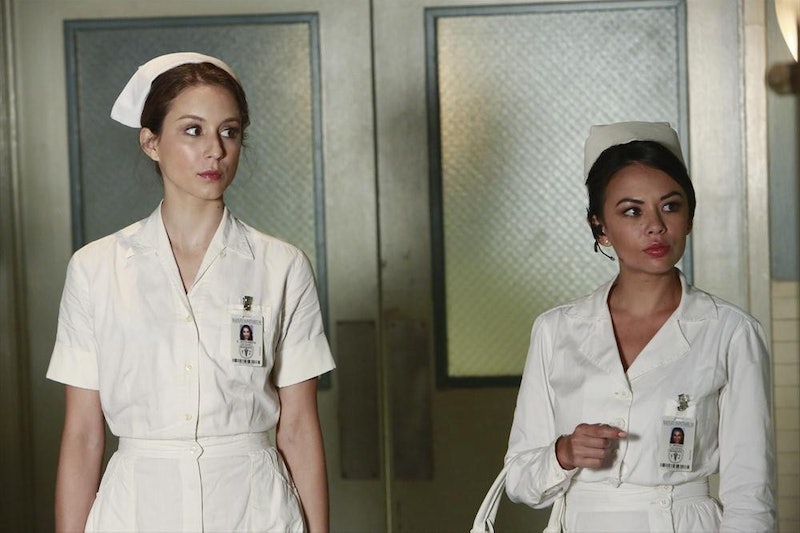 Well, here we are with another "A" reveal and another dead body. Pretty Little Liars' Mona Vanderwaal died in the #FatalFinale because she finally figured out that Alison DiLaurentis was "A." Which, again, feels way too simple — just like when Ezra thought Shana was "A" in the premiere — but it's absolutely a twist worthy of four and a half seasons of PLL nightmares. Following an episode that aligned Mona with the liars as perhaps the most useful ally they've ever had and revealed more about Bethany Young — a blonde in a black hoodie killed her and put her in their trunk. And it was traumatizing. If I never have to see a dead body on PLL again, it'll be too soon.

Season 5a has been leading fans toward this conclusion for the past 12 episodes — Alison DiLaurentis is "A" and it makes perfect sense. Ali's gotten progressively more sketchy, menacing, and all-around sociopathic since she returned to Rosewood — thanks for that diagnosis, Mona (RIP) — and it all came to a head on Tuesday night. Ali killed her. Okay, fine, we don't know exactly who or which "A" killed her but PLL did its best to make us believe that it was Alison.

Mona and the liars spent the entire episode trying to find the right evidence to support their (and our) theory that Ali and "A" are one in the same. And find it Mona did, in Radley's tapes of Bethany Young's (yup, she's baaaack in this episode) therapy sessions. She alerted the other girls that Alison had lured Bethany to Rosewood to kill her because she knew that Mrs. DiLaurentis and Bethany's father were having an affair and finally said it out loud — Ali is "A."

And fittingly, during her celebration for finally outsmarting Alison, someone in a black hoodie whose hair looked a hell of a lot like Ali's killed her. Stabbed her, to be more specific and that's that. PLL made it blatantly clear, timing-wise, that this wasn't just because "A" had finally had enough of Mona — it was because Mona had identified her for the raging, manipulative sociopath that she is.