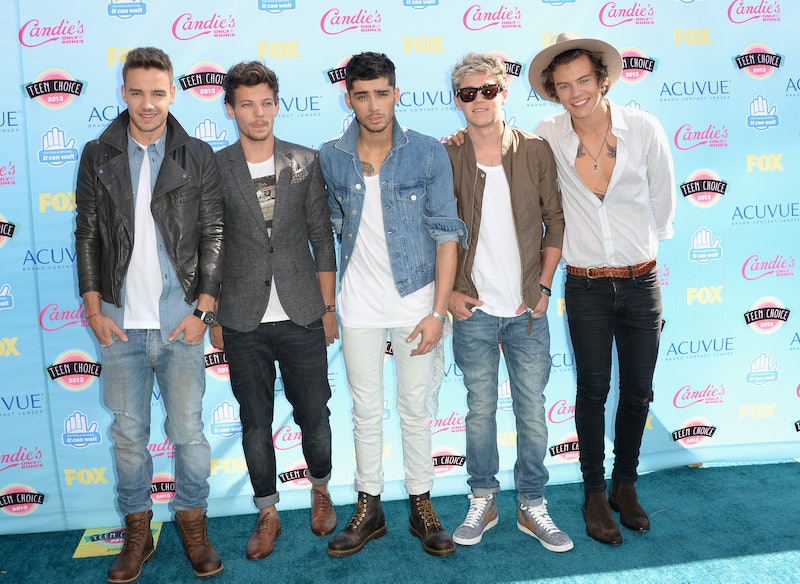 Following Thursday night's Crazy About One Direction, a documentary about the passionate world of One Direction fans, rumors have begun circulating that dozens of One Direction followers committed suicide, prompted by their community's negative depiction in the film. Twitter reports that up to 42 young "Larry Shippers," a.k.a. fans who support a romance between band members Harry Styles and Louis Tomlinson, have taken their lives since the documentary's release. The hashtag #RIPLarryShippers has been trending on the social media site since Thursday.

The rumors caused band member Liam Payne to comment, first tweeting "not really sure what's going on right now I just hope everyone's ok," and later saying that he was "hearing some horrible things... Really hope this isn't true." He continued: "we couldn't give a fuck what any documentary says there [sic] dramatised [sic] for entertainment and full of bullshit anyway we all know..."

So far, none of the other One Direction members have commented, and the rumors are unconfirmed; it's very possible that no suicides have actually occurred, and we hope that's the case. Still, if there's any truth to the hashtag taking over Twitter, it paints a disturbing picture of what "fandom" truly means in today's culture. The members of One Direction are far from the first celebrities to incite intense, often dangerous passion from their followers; the fans of Justin Bieber, Taylor Swift, Selena Gomez and more routinely post tributes, join forces, and stalk events in the hopes of meeting and impressing their idols. They call themselves "Directioners" and "Beliebers," and often, they'll do anything to get noticed by the celebrities they adore.

Obsessing over the famous is not a new concept, of course, but there's a huge difference between fandom in the pre- and post-Twitter world. Due to social media, stars are able to share intimate photos, videos, and other details of their lives with the public, allowing them to grow their audience at the price of causing overzealous fans to take things too far. For some celebrities, this isn't too much of an issue — Tom Hanks has 7 million Twitter followers, but he can post about going to the doctor without igniting an Internet frenzy — but for those with fans predominantly in their tweens and teens, every post is an invite for issue. Young fans are generally more passionate about their obsessions, and thus take them with a higher degree of seriousness. If they feel that they're being portrayed as "insane" or "deluded," which, according to Twitter, was how the One Direction documentary made the band's fans look, they might react in a much more intense way than someone a few years older.

Of course, that's a generalization, and the vast majority of young fans pursue their obsessions in a far more healthy way. Still, with Twitter, Instagram, Vine and more making it feel like celebrities are letting us directly into their lives, some people may take their passions too seriously. We sincerely hope that no One Direction fans committed suicide because of the documentary, but unfortunately, in today's world, it's not a far-fetched possibility.

Fandom is a great thing, bringing together people from all over the world who share common interests. Doctor Who wouldn't be the same without its massive base of Whovians, Glee needs its Gleeks, and One Direction would be nothing without the support of Directioners. Yet it's disturbing to think that fandom has transformed over the years so drastically that fans are potentially taking their lives, when the purpose of their community is to band people together.