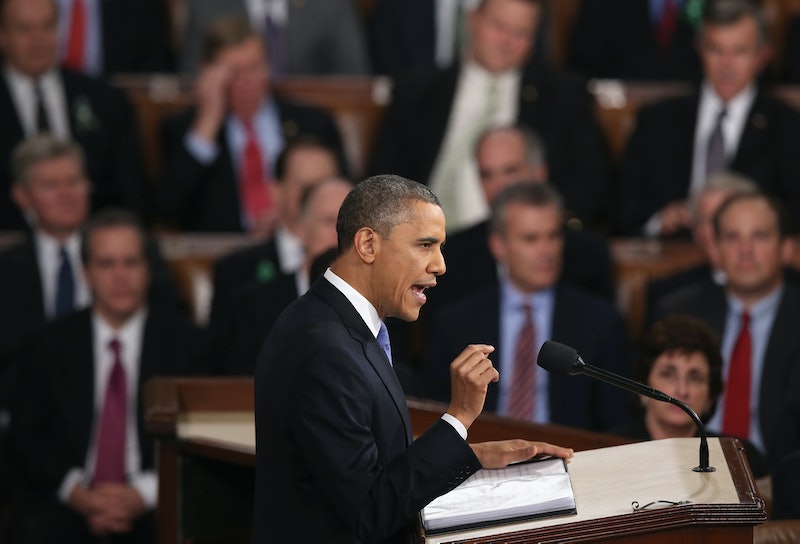 Over the past week, the White House has wrestled with the possibility of increased intervention and airstrikes against ISIS in Syria. On Monday, U.S. officials confirmed that President Obama is working with the Pentagon to send spy planes into Syria as preparation for more possible action. While many compare this upswing in military action to Obama's 2013 request to intervene in Syria against the Assad regime, one thing seems markedly different: Congress is much quieter this time.

Some Congressman are singing a similar tune to last year, demanding that the President seek Congressional approval for any military action. But, by and large, the responses seem far more tepid than just a year ago.

So why am we so shocked by the lack of major response? Why is it interesting that there are moderate responses and opinions on both sides? Because in the past, Congressional reactions to Obama's actions – and vice versa – have often been far more aggressive or dramatic. Even moderate disagreement seems like a marked departure of days past.

For perspective, some all-too-familiar dramatic examples of what has happened when Congress and Obama disagree:

Who could ever forget when a U.S. Congressman interrupted the President's 2009 Healthcare speech to voice his disagreement. "You lie!" Representative Joe Wilson shouted form his seat while President Obama tried to create a distinction between the rumors and the realities of the Affordable Care Act's details. President Obama –who can usually keep it cool – looked visibly angry following the outburst.

From the start Obama's second term, I almost thought President Obama was just giving the exact same speech over and over again, as he continued to plead Congress for any sort of legislative action. From the Jobs Act to the budget crisis, President Obama consistently requested that Congress get to work. He consistently repeated the message that there were a few places where politicians agreed across the aisle, and those were the issues that should be tackled.

The government shuts down - October 2013

No big deal. Just the government shutting down because Congress and the President couldn’t agree on a budget. In a press conference, only seven hours before the government shutdown was set to commence, President Obama mentioned the hundreds of thousands of employees that would be furloughed as a consequence of the shutdown. Referring to Congress Obama said, “All of this is entirely preventable if the House chooses to do what the Senate has already done.”

Obama continued, "One faction, in one House of Congress, in one branch of government doesn't get to shut down the entire government just to refight the results of an election."

Just a few weeks ago, President Obama and Congress couldn't agree on the level of unilateral actions the President should take on his own. So how did House Republicans respond? By trying to sue him. During a speech in August, Texas, in response to the criticisms of his job and the possibility of being sued, President Obama quoted the movie The Departed. "Sometimes, I feel like saying to these guys, 'I'm the guy doing my job, you must be the other guy.'"

Explaining this move, Congressman Jeff Duncan spoke on the floor of the House: "The President has failed us in two directions. He has failed to execute the laws that we have written. He has rewritten those laws on his won and I believe this is a breach of his oath of office to uphold the laws."

Speaker John Boehner said, "This is about defending the institution which we serve."

Maybe after all these extreme reactions, Congress and President Obama are finally ready for a more moderate approach. But only maybe.