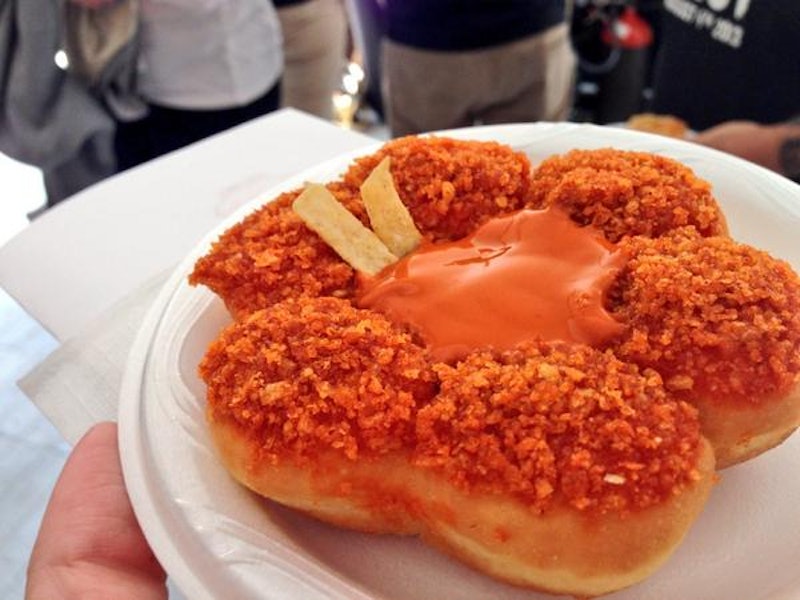 Okay. That’s it. Clearly the apocalypse is here and it has arrived on a chariot of fast-food creations so weird that only the devil himself could have dreamed them up. Tim Horton’s, soon to be known as Tim Horton’s/Burger King (Tim Burger? Burger Horton’s? Tim Burgerton Hortonking’s?), has rolled out something that trumps just about every other fast-food monstrosity I’ve seen — and I’ve seen a lot of them. It’s called a Buffalo Crunch Donut, and you guys? It looks horrifying.

In essence, the Buffalo Crunch Donut is what would happen if your favorite buffalo wings had a love child with some monkey bread: Its base consists of a sweet, flower-shaped, pull-apart donut, while a well of buffalo sauce oozes in the middle and a whole bunch of buffalo-flavored tortilla chip crunchies find their way merrily across the top. It comes in two levels of spiciness, mild and hot — the difference being that some ranch dressing served on the side of the mild one combats the heat somewhat.

I love doughnuts. I love buffalo sauce. But in spite of my deep and abiding fondness for both of these items, my internal monologue is still screaming the following sentence: “WHY WOULD YOU DO THAT?!”

Never before has this GIF been more applicable:

According to GrubStreet, it’s being served exclusively at the New York State Fair; if we had known about it earlier, you'd better bet we would have included it on our list of the craziest state fair foods you can shove down your gullet this summer. Alas, the only review I’ve found from someone who’s actually eaten the thing, though, it's disappointingly brief. Syracuse.com writer Michelle Breidenbach described it, “As advertised. Crunchy tortilla chip topping. Hot sauce. Donut.” Sure, this short-and-sweet collection of words identifies all of the things that make up the Buffalo Crunch Donut — but what do they all taste like together? Is it gross? Unexpectedly amazing? Simply unremarkable? Inquiring minds want to know!

I feel these would be relatively easy to re-create on your own, so maybe I’ll have to give it a shot the next time I run to the grocery store… If I’m feeling brave enough, that is. We shall see. We shall see…