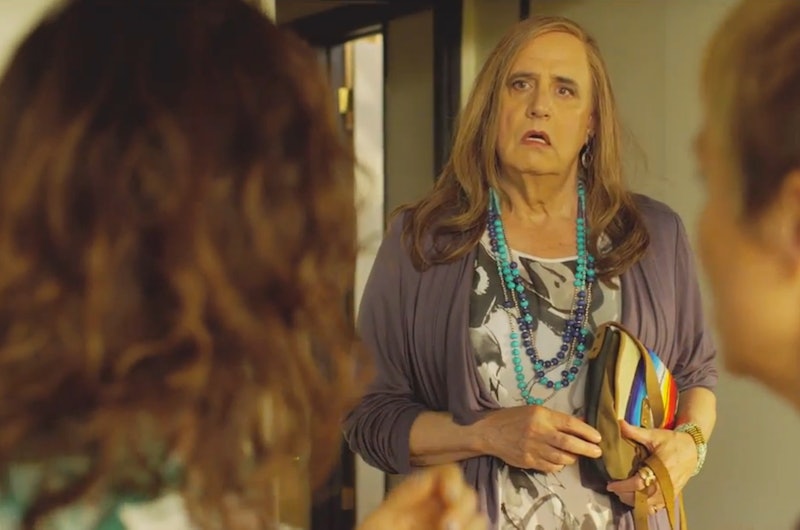 Netflix may be dominating the game when it comes to quality streaming TV shows (hello, House of Cards? Orange Is the New Black?) and, historically, Amazon's streaming service, Amazon Prime Instant Video, had kind of been chugging along on its coattails with no real momentum of its own. Sure, Amazon's shows like Alpha House were compelling enough and had some star power behind them (John Goodman, for instance), but still, nothing to add up to the awesomeness that is OINTB or any other Netflix shows. Until now, that is — Amazon's just rolled out the first full trailer for Transparent , a comedy starring Arrested Development star Jeffrey Tambor as a parent of three named Mort who, after years of struggling with gender identity, begins transitioning into presenting as a woman.

And it looks great.

Created by Six Feet Under producer Jill Soloway, the series also stars Amy Landecker, Gaby Hoffmann, and Jay Duplass as the three children of Mort, who assumes the name of Maura during her transition period.

Based off the trailer, the show will follow Maura as she reveals her decision to the family, and it seems like it'll tackle a lot of issues that trans individuals face when making such a big life change in a respectful and compelling manner. The same really can't be said for many other shows, with the exception of Orange Is the New Black. It's quite different — not to mention great — to see television shows growing more socially aware and diverse, even if it's just on streaming websites (broadcast TV, of course, has yet to follow), so that alone makes Transparent a must-watch.

The following exchange says it all:

SARAH: Are you saying you're going to start dressing up like a lady, all the time?"

Transparent will premiere season 1 in full on Amazon Prime Instant Video on September 26. Check the trailer below.