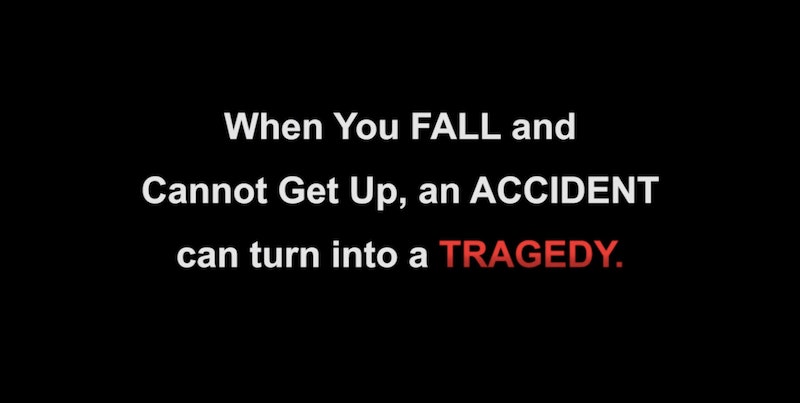 Hey, remember Life Alert? Well, Life Alert has a new ad out — and frankly, it's really hard to watch. In stark contrast with the company's past ads, this commercial is a realistic and terrifying portrayal of a senior citizen falling down her basement stairs, screaming for help because she can't get up. And no one can hear her.

Traditional Life Alert commercials featured seniors, family members and doctors talking about the benefits of the senior safety alert system. These commercials showed a possible scenario where Life Alert would be required, but the incidents weren't exactly realistically portrayed. Their famous trademark "Help! I've fallen and I can't get up!" is constantly made fun of, and may have made their ads pretty comical, but the point of the product came across.

But this latest commercial is a marked change from the corny tagline and the sweet old ladies who told us about how Life Alert saved their lives or made them feel safe. The way the camera pans through an empty home while someone screams in the distance is very eerie.

In the opening scene of the new ad, all the viewer sees is a mantle in a gloomy room with an old-fashioned clock ticking quietly, while eerie music starts to play

Then the camera shows different scenes from around the house, slowly panning over the quiet, empty rooms.

Right when you pass over these pans, you can distinctly hear a woman yelling and crying in the distance.

The camera continues to pan over different rooms and objects. And the whimpers continue. Even as neighbors play with a dog right outside.

Finally, the ad reveals a senior woman lying on the floor, having apparently falling down the stairs.

And then, this message:

For perspective, here's an example of an old Life Alert commercial. In the first few seconds, a very wise-looking former U.S. Surgeon General named Dr. Koop talks about how crucial time is in an emergency. "Especially when seconds often make the difference between an accident and a tragedy," he says.

Then, a fancy senior woman comes on screen and shows us her fancy Life Alert product. She calls it a "magic wand" that helps her contact the police, paramedics or other emergency workers.

Then, while she speaks, we get to see Life Alert's office, with all of its computers.

Then we meet a bunch of other seniors who provide testimonials about how great Life Alert is. One describes how life alert was there for her when she had a heart attack, and how Life Alert allows her to remain out of a nursing home. Another says she's comforted by having Life Alert around

Then, Dr. Koop comes back on-screen and says, "Thanks to Life Alert you can live at home without ever being alone. And that's why I wear one too."

Following the latest commercial's release, lots of viewers have voiced their disapproval.

While the commercial is certainly a deviation for Life Alert, scary commercials are by no means new.

For those organizations or campaigns that are focused on a very particular message, like quitting smoking or no texting while driving, haunting commercials are certainly a marketing technique.

AT&T created an "It Can Wait" commercial campaign to curtail texting while driving. One that stood out to me was a young man describing a car accident caused by his texting – an accident that resulted in killing three children.

Another prominent example are anti-smoking commercials. Smoker or not there is no doubt that we've all seen some of these commercials that can be seriously disturbing and heart-breaking. One of The Center for Disease Control's most prominent anti-smoking campaign is called "Tips from Former Stories," detailing some tragic experiences from ex-smokers.

When candidates are running for office, ads can get pretty negative. Some insinuate that terrible things would happen if an opposing candidate were to win.

In a 1964 campaign, the infamous Johnson "Daisy ad" shows a young girl counting the petals of a daisy, when all of sudden the countdown for an atomic bomb explosion interrupts her. The commercial was only shown to a small portion of the country, but its content was so disturbing and its implications so clear that it quickly became notorious.

Another infamous and highly controversial political ad was released during a 1988 campaign. The commercial attacked Dukakis' stance on crime, calling him out for giving a criminal weekend passes that allowed him to continue breaking the law.

Not only was the commercial candid about his graphic crimes, but the ad – dubbed the "Willie Horton ad" after the named convict – was attacked for being racist, since Horton –who was pictured in the commercial – was black, and the ad catered to racist stereotypes.