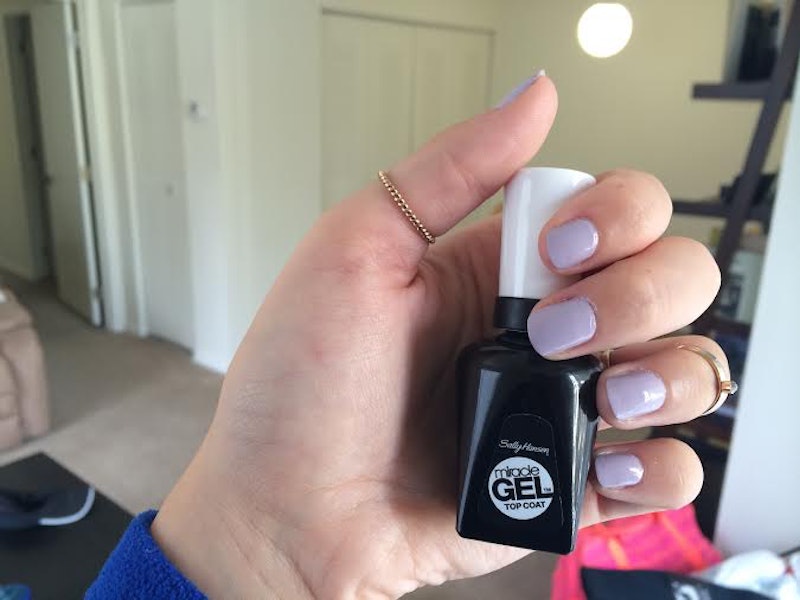 If you love beauty, then odds are you love a good manicure as well. Your cuticles are taken care of, you don't accidentally paint half of your fingers when having to use your weaker hand, and hey — who doesn't like to pamper themselves a little? So when the gel manicure came along (AKA: an instantly-drying miracle that lasted longer and made life easier), I was pretty happy. But they're not cheap, and that's for sure. I saw Sally Hansen's "Miracle Gel" Polish in the store recently, and decided to try it out. A cheaper, at-home, no light alternative to a gel manicure? Don't mind if I do. Here's what I found out.

First of all, this polish is only going to be worth it if you plan on using it as a consistent alternative to salon gel manicures. At around $10 a bottle, it's only a little more expensive than any other high-end nail polish, but you also have to buy the top coat to go with it. So, no, it's not the cheapest polish around, but if a lacquer is claiming to last two weeks, any cheaper would be a bit suspicious in my book.

In terms of color, there's basically every shade you could imagine, and I am borderline obsessed with the color I chose: "All Chalked Up." Unlike a lot of other polishes, the color of this on my nails was exactly what I saw when I picked out the bottle. I can't tell you how happy I was to find a shade that was pretty, subtle, and trendy. Another plus — the wand/brush of the polish. It's a little shorter and square-r than a lot of other nail polish brushes, and maybe that's why it works so well. I almost had no mistakes on either hand after painting them, which is a rarity for me.

Now for the real questions. Is it going to dry instantly? No. And it doesn't claim to, either. I would definitely say it dries faster than most other polish, but to be safe, you're still going to have to wait about 15 minutes before you start trying to do anything. And the big one: Is it going to last two weeks? Well, I think that depends. But probably not.

My color lasted flawlessly for the first two days, but when it came to surviving the process of moving into a new apartment, it didn't stand a chance. Slowly, but surely, it chipped off. I was sad to see it go, but certainly didn't mind reapplying a coat, because the shade was that beautiful.

Some minor chipping, but nothing to loose my head over.

In comparison to a light-dried gel manicure, I'd say that it is only slightly less durable. Most of my gel manicures only last for around a week without chipping, anyway, and I think that minus any activity that would be rough on your hands, you could easily make it last a week or so — especially if your nails are a little shorter than mine.

Is it worth the investment? I would say yes, but is it really like getting a gel manicure at the salon? Nope. But that may have more to do with the whole "you have to do it yourself" part than the longevity.