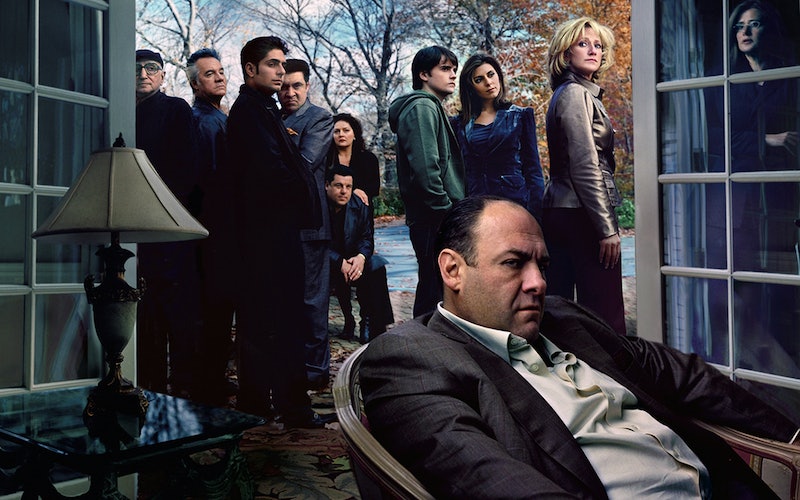 So that's it, then: After years and years of speculation — I'm talking seven years' worth of it — we finally have an answer from creator David Chase himself about whether or not Tony Soprano (portrayed by the late and great James Gandolfini) was killed in the moments after that open-ended series finale back in 2007. Fans of the show have debated this since the screen went black, and now, finally, we have a concrete source! So what's the verdict? According to Vox writer Martha P. Nochimson, David Chase allegedly told her that Tony Soprano did not die at the end of The Sopranos , contrary to fans' speculation. Here's what he apparently said, word for word:

I had been talking with Chase for a few years when I finally asked him whether Tony was dead. We were in a tiny coffee shop, when, in the middle of a low-key chat about a writing problem I was having, I popped the question. Chase startled me by turning toward me and saying with sudden, explosive anger, "Why are we talking about this?" I answered, "I'm just curious." And then, for whatever reason, he told me. …[W]hen he spoke about Tony and the question, [Chase] was laconic.Just the facts and no interpretation. He shook his head "no." And he said simply, "No, he isn't."

That's it. Years of debate all comes down to this, one simple sentence that Sopranos creator David Chase apparently told a Vox writer. Tony Soprano did not die, though all evidence during that last scene seemed to point to the contrary. Mystery solved. We all can move on now.

But I've gotta ask: Should we? While it's quite possible that Chase was being completely serious when he — in a "laconic" manner — answered Nochimson, but it also sort of seems like he's brushing the question off in a way, throwing everyone off the trail. Wouldn't it be sort of genius, in a way, to say something so simple as this to keep fans guessing? To reignite thoughts about what went down in those moments after the screen cut to black? I don't necessarily think Chase is fibbing about Tony's fate because, despite the fact that fans have long-assumed Tony died with good evidence, there's no reason for him to lie — but assuming Tony went on living invites a whole new host of questions: Did someone else die? Did anything other than the family having a meal together even happen?

That, I think it's safe to assume, we will never know. And that's sort of the beauty of it, really — Tony's life, just like the show, will never present itself in black and white, right and wrong, yes and no. The answer will forever be complicated, just like the man himself.

Check out the final scene again below: