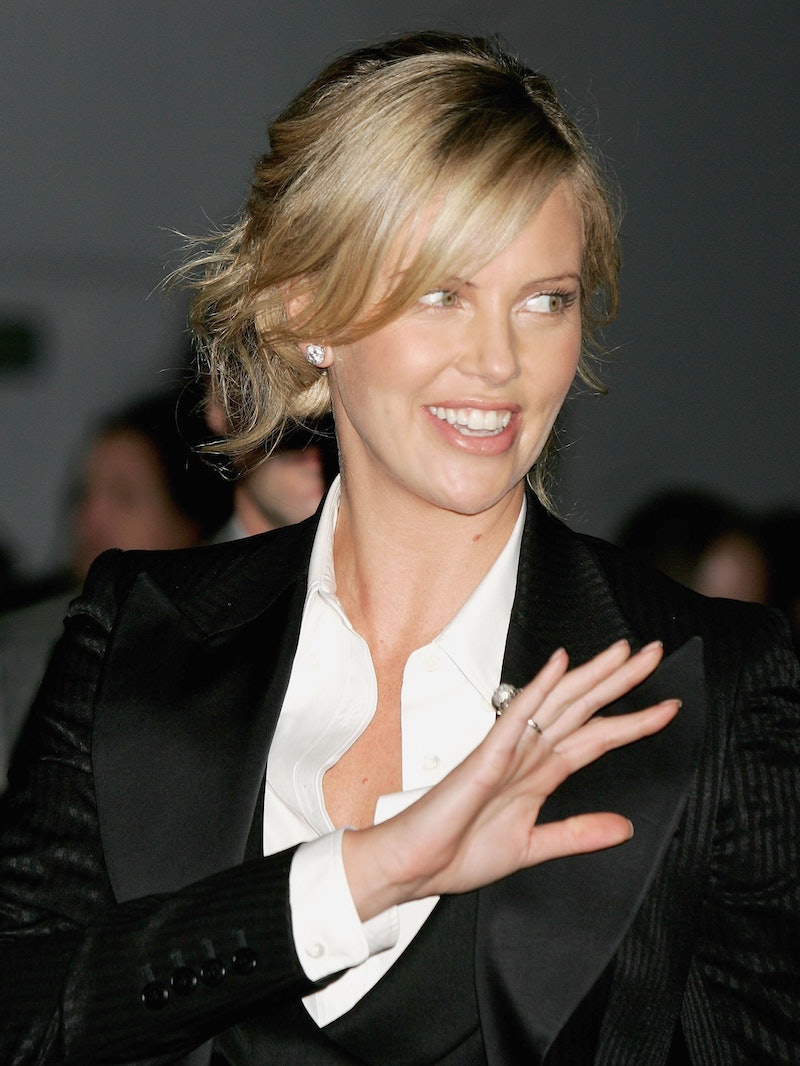 In this modern age of relative enlightenment, it seems unlikely that certain modes of dress would be off-limits. Female celebrities wear tuxedos on the red carpet (Charlize Theron, I'm looking at you), men wear skirts thank to the precedent set by Marc Jacobs, and children have the option to wear couture clothing if they happen to be North West. So one would think that shopping for clothing meant for the opposite sex would be a snap. Not necessarily, I discovered when I sought to swath myself in menswear.

I love a good androgynous look. My obsession with incorporating gentlemanly items into my wardrobe began when I decided to dress in an oversized men's button-down, tie, and heels for Halloween in high school, and progressed when I discovered a stunning printed silk bow tie during a study abroad trip to Venice several years ago. "For your boyfriend?", a friend asked curiously. "For me," I responded. I still love its beautiful periwinkle shade and delicate dotted pattern.

However, much of the "menswear" items in my closet are actually by women's clothing designers taking inspiration from suiting classics instead of actual clothing designed for men. In search of a few key pieces for fall — and yes, to satisfy my curiosity — I ventured to two local department stores, one high end and one high street, determined to figure out if a woman can shop for men's clothing without inciting the snark of sales associates and fellow customers. Fashion is especially open-minded this year (hello, culottes and Birkenstocks), but in the real world, breaking these boundaries can be harder for more traditionally-minded individuals to accept. After all, there are still people who believe that women don't merit the same salary as men when they carry an identical title, so women wearing men's clothing may not be the easiest pill for them to swallow.

When I stepped into H&M's menswear department, I was first struck by the lack of salespeople about. The children's section buzzed with helpful clerks, the women's department had at least two milling about, but the men's section was sadly neglected. After gathering an armful of sweaters, button-downs, blazers, and slouchy sweatshirts, I managed to flag down an employee to ask for a dressing room. "Downstairs next to the checkout line," he said with nary a glance at my clothes. The dressing room minder was equally nonplussed, and seemed genuinely surprised when I didn't purchase any of the items. The browsing customers were likewise uncurious about my clothing preferences.

My next stop was the more high-end Nordstrom, where I went straight to the center of the formal menswear section and demanded help in selecting a bow tie. After explaining that I desired one which channeled fall trends to the utmost, the sales associate asked, "How tall is he? Does he like pattern or print?" "It's actually for me," I responded. "I need a fantastic bow tie or a tie for autumn." The saleswoman barely paused a tick before exclaiming, "Oh! Cool! In that case, you should go for a plaid or checker in muted colors. In terms of ties, I'd go thinner based on your height and frame." Indeed, an authoritative manner seemed to make all the difference in conquering the world of menswear. I was so pleased with the recommendations that I ended up with a very dashing beige and black plaid bow tie to trot out in September. As I paid for the purchase, I noticed another woman scouting out several ties and shirts for herself; the boundaries of gendered dressing, I was satisfied to note, are becoming much fuzzier.

Bolstered by my successful foray into men's accessories, I headed over to casual wear to gauge how simple it would be to snap up a sweater or a pair of slouchy slacks. I caught the attention of one employee, to whom I explained I was searching for dark knits in a size small or extra small. "Are you two vacationing somewhere cold this fall?" she asked. "No, I'm just looking for some warm layers, but these are too large. I want something cozy but fitted, and very current to the trends," I told her. After selecting a few winners, I told her I was ready to try them on. She diligently headed in the direction of the dressing rooms, and then made a sharp left turn into the cash register. "I'm actually just looking to try these on, can I do that?" I asked. After several long moments of looking flustered, the woman perplexedly apologized several times over, showed me to a fitting room, and promptly disappeared. The sweaters which she had chosen for my phantom male companion were woefully oversized, to the point where most resembled a baggy dress on me. I slipped out of the dressing room and left the department empty-handed.

So what is the takeaway from these disparate experiences? Two separate employees of a major department store saw a single woman shopping in the menswear department and assumed she was buying for a boyfriend. However, both rallied after discovering I was shopping for myself — though with some hesitation in the latter case. And not a soul at H&M seemed as though they would be concerned if I started shopping for myself in the baby department, let alone menswear.

Despite the vehement devotion to menswear-inspired designs by womenswear couturiers, it seems that the rest of America has awhile to go before immediately assuming clothing might be purchased by anyone of any gender. While I wait for the nation to catch up, at least I have one very natty bow tie to satisfy my menswear craving.