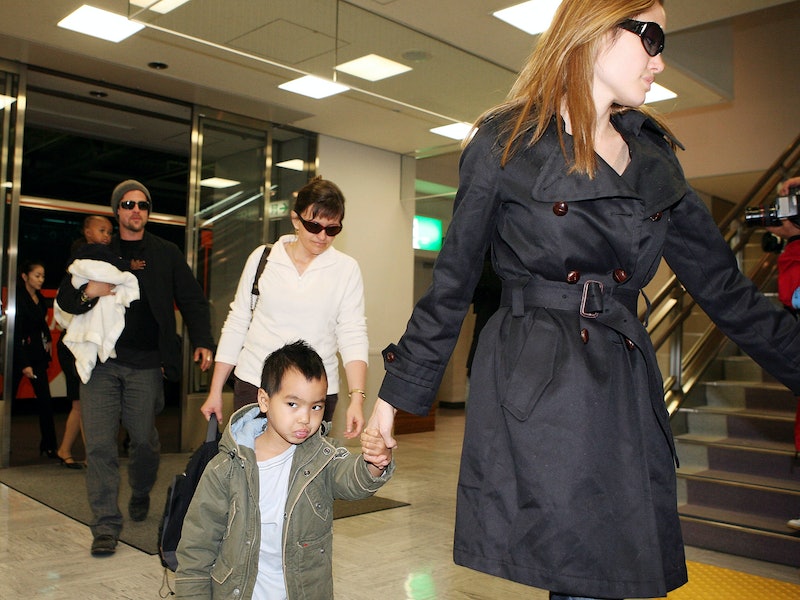 Congrats to the happy couple! Brad Pitt and Angelina Jolie got married in France over the weekend, with a secret ceremony in France. I know, right? Who knew they weren't already married? After nine years and a whole bunch of kids together, the Hollywood power couple (I hate, hate, hate the phrase "power couple," but it definitely applies here) finally decided to tie the knot. BUT WHAT WERE THEY WEARING?! Well, just like the rest of the ceremony, Jolie's kids helped design her wedding dress.

Going off Jolie's red carpet style, it's no surprise there weren't a bunch of ruffles and tulle fluffing all over the place at this Pitt-Jolie union. Instead, she opted for a simple, empire-waist gown in an off-white silk. In May, Jolie told USA Today that she hadn't even picked a dress yet — though I doubt she would have had any problem securing one from a big name designer last minute. And, of course, to make the gown unique, Jolie had a hand from her little ones, who added their own sketches to the train. It's honestly one of the cutest things I've ever seen, and certainly a wedding dress that doesn't make we want to gag.

Jolie told People earlier this year that her kids would be basically planning the ceremony, which meant there would likely be paintballs and/or Disney-themed decorations involved. A ginormous dress just wouldn't do if you're running around shooting stuff with paint. Check it out below — no surprise that the Jolie-Pitt kids would have so much artistic talent.