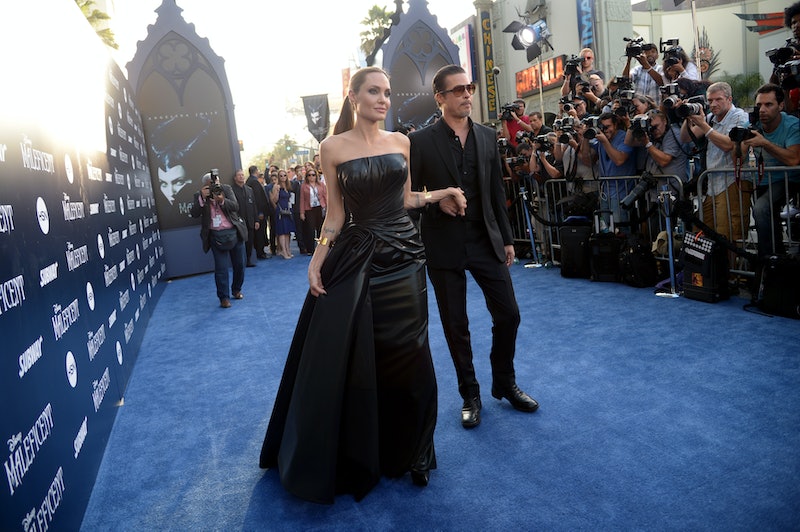 Oh Brangelina, you sneaky, sneaky devils! If you haven't heard the news yet — who am I kidding? You've definitely heard the news. Angelina Jolie and Brad Pitt got married on Saturday, the news broke on Thursday, and now the world is filled with screams of, "How could they do this without us?!" and resignations of, "But for real though, that's cute that Pax and Maddox walked her down the aisle." Another question people are no doubt wondering about is whether there are pictures of Angelina Jolie and Brad Pitt's wedding. The straight answer is: no. But the still plausible answer that you'll likely enjoy much more is: not yet.

Here's the thing, Pitt and Jolie pretty freakin' private, but they also know how to perfectly maintain that level of privacy. Instead of never taking their children to events or never talking to the media, they are selective about when their children make public appearances and know exactly how much information to give out about their private lives. This way, when you see Brangelina on a tabloid cover, you probably think "This is all BS. Brad and Angie are honest with us" rather than, "This could all be true! They've never told us otherwise" or worse, "This could all be true! They lead us on all the time!" (See: Tori Spelling)

Because I have total faith in Pitt and Jolie knowing how to keep things private when they need to, I would be shocked if paparazzi pictures of this wedding come out. Plus, the photos definitely would have come out already seeing as the wedding was on Saturday. For example, Kim Kardashian and Kanye West had a Saturday wedding and those paparazzi pics were available IMMEDIATELY. Were they grainy? Yes, but they were available.

So without paparazzi pics and with Brangelina being super private, how could photos possibly become available? One word: charity.

When Pitt and Jolie welcomed Shiloh in 2005, they sold the rights for her baby pictures to Getty Images in exchange for a charity donation. According to the Associated Press, "People reportedly paid $4 million for the U.S. rights to those photos, and London-based Hello! magazine obtained the British rights."

In 2007, a similar deal occurred with photos of Jolie, Pitt, and their adopted son Pax. Getty again bought the photos, and a donation went to the Jolie-Pitt Foundation.

And in 2008, when twins Vivienne and Knox were born, Pitt and Jolie sold the rights for their baby pictures to People and Hello! magazines in a joint deal for a reported $14 million. Pitt spoke with NPR about selling the photos in a 2011 interview and explained,

We have to plan an escape every day just to get out of the house — kind of a Mission Impossible with decoys, and that’s the life we live in, and that’s the one we asked for. But we knew there was a bounty on our head … and we know the lengths they go to to get that shot. So we figured, 'Let’s cut it off in the beginning,' and instead of that money going to people I do not respect, we would make some good out of it.

So, will the same thing happen with the wedding pictures? Well, wedding photos are different from photos of children, of course. While paparazzi can always go and get more pictures of a kid (albeit, not the very first professionally shot photos), a wedding is a one time event. You either are there for the photos, or you aren't, so Jolie and Pitt wouldn't be cutting anything "off in the beginning" by releasing the photos. Then again, those photos could bring in a ton of money for their charity. Back in 2012, an anonymous magazine insider who spoke with the Huffington Post said,

In this market, the wedding pictures might be worth around $5 million. That would be for worldwide rights, so that whoever buys them in the USA could make money selling them to publications in other countries. Although the big question will be what sort of access will the couple allow? If it's just a few shots where you can’t see the dress or them kiss, then it could be lower.

Scott Cosman, who spoke with E! News also in 2012, thinks it could be even higher. "A wedding photo with all the kids? [Magazines] would pay a fortune for that. Worldwide rights for a picture like that, with all the kids, I would say $10 million-plus."

With the wedding already over, Pitt and Jolie have likely already come to a decision as to whether or not they'll sell the photos. Now you'll just have to wait and see if Angelina Jolie in a wedding dress pops up on the magazine stand at your grocery store. (Just be sure it's not photoshopped. Those tabloids can be just as sneaky as Jolie and Pitt.)