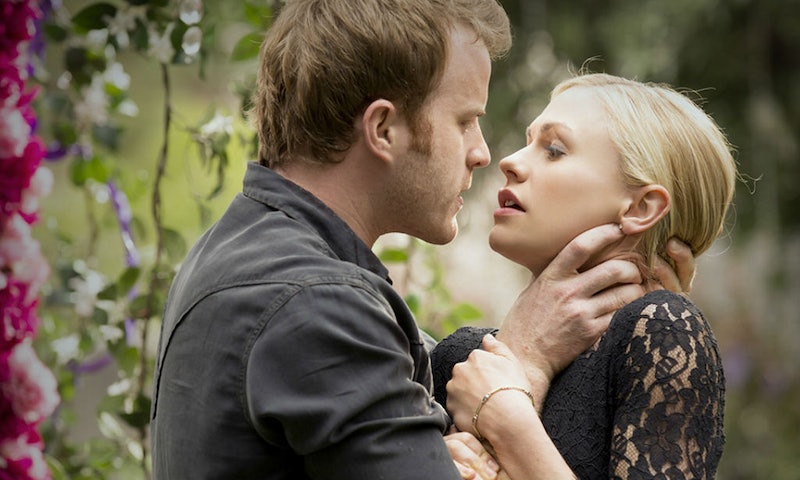 Excuse me while I massage my brain for the next hour. It's a little sore from trying to figure out why anything that happened on True Blood's season finale was necessary. "Radioactive" was just that, and now Bon Temps is only safe under the influence of copious amounts of alcohol.

After a rather brief interlude that felt like lukewarm leftovers from last week's dragging episode, the LAVTF, Warlow's aggressive marriage offer, and vampire day-walkers are a thing of the past and we're treated to a six-month time jump. Fun fact: in Bon Temps, six months moves a lot faster than six months just about anywhere else. Suddenly Sam is mayor of Bon Temps, Arlene has turned Merlott's into Bellefleur's, Bill has written and published a non-fiction novel, and Jason has had a hell of a lot of oral sex with his vampire betrothed. It should be noted that Andy's rapidly-aging fae daughter is still a teenager somehow.

While ridding Sookie of her archaic marriage pact and turning her masochistic — not to mention rapey — suitor Warlow into glowing red goo was necessary and somewhat cathartic, it launched us into a confounding season finale and one that doesn't seem to have changed much, at that.

Once Bill fails at saving Sookie, allowing Jason and Grandpa (via a conveniently-ready portal in Sookie's bathroom) to take that glory, and the newly-deceased Warlow's blood stops making vampires impervious to sun, Bill and Eric are no longer viable romantic options for Sookie. Bill hasn't earned her trust back and Eric is either dead or severely burned following his rather dangerous bout of nude sunbathing on a snowy mountaintop. Naturally, in just six short months, Sookie has jumped the good ship vampire for that tall drink of werewolf water: Alcide Herveaux and his handsome new haircut.

Things in Bon Temp have changed dramatically, but somehow this all seems so familiar. Sookie is no longer a faerie princess being held captive by an angry villain. She's not having glowing sex in chandelier-decorated cemeteries. She's a settled, church-going girlfriend to a guy who throws her over his shoulder and occasionally gets extremely jealous. She's about as boring and typical as can be. But she's still got a hold on Bill and he's once again obsessed with protecting her. Bill may not be a big-time politician like he once was, but visiting nightly news programs to promote his world-view-altering book certainly reinstates him a man with everything (except Sookie) once more.

So why are we still here? Ahem. I mean besides the superficially valuable potential of Sookie-Alcide sex. Well, first and foremost, we have to find out whether or not Eric died in a fan of flames. Secondly, there's this tiny little problem called Hep V. After all, with no vampire alert system, some unlucky blood-suckers were exposed to the infected Tru Blood. But a bunch of bed-ridden vampires dying in the arms of their loved ones like Nora did doesn't make for a very good cliffhanger. That's likely why True Blood's writers (seemingly) borrowed from fellow horror staple The Walking Dead and turned the Hep V infected into a bloodthirsty army of drones hell-bent on infecting everyone in sight.

The writers certainly get points for effort. They sought the nuclear option and changed the entire face of Bon Temps, the problem is that leaving us with Bill yearning for Sookie and armies of the undead descending on innocent people isn't exactly the life blood we were looking for.