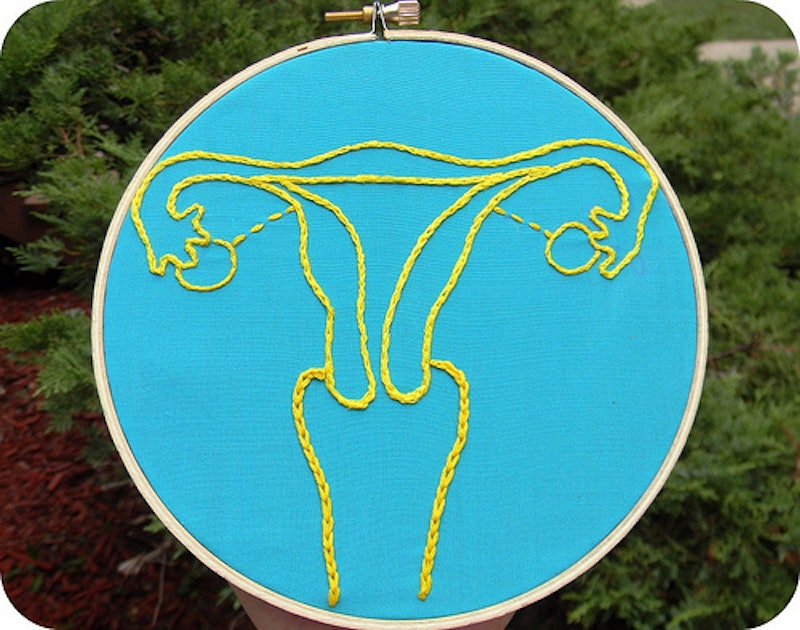 I can't think of anything more visceral to install at a former women's prison than a giant walk-through vaginal canal. That's exactly what artist Reshma Chhiba has done at the Old Women's Jail in Hillsbrow, Johannesburg, as part of her art exhibition "The Two Talking Yonis." (Yoni is the Sanskrit word for the vagina and/or vulva).

Chhiba's installation is a a 12-meter long (approximately 39 feet) tunnel made from red velvet and cotton. Visitors to the tunnel experience the sounds of screaming and laughing, which are played inside. Chhiba told Johannesburg's Sunday Times:

"Not many people — men or women — are unfazed about walking through this vaginal canal."

The tunnel is in line with Chhiba's larger artistic work, much of which is inspired by the Hindu goddess Kali and symbolic representation of female energy. Chhiba says, though, that the symbolic vagina she's constructed shouldn't be seen as solely Indian or Hindu art: "It's a global vagina. It's scary to people raised with certain patriarchal values."

Chhiba's work is likely not for everyone (I can't really see Glenn Beck or Rush Limbaugh digging on a bigger-than-life-size vaginal art installation), but I think it sounds pretty cool. I dig art that causes people to engage on an intense level, that uses multiple senses to do so, and that makes a big, unavoidable statement. Chhiba paints and take photographs, too, but I'm betting this installation is the part of the "The Two Talking Yonis" that art lovers are going to remember. If I were in Johannesburg, you can be damn sure I'd head in for my own walk through Chhiba's yoni.

"The Two Talking Yonis" is an ongoing art event; Chhiba's paintings and photographs along the same theme will be exhibited at other venues in Johannesburg until the end of August. Read more about the exhibition on the artist's Facebook event.

More like this
10 Organizations To Support On Latinx Women's Equal Pay Day
By Caroline Burke and Mia Mercado
What Does “The Rizz” Mean On TikTok? The Viral Slang Term, Explained
By Alexis Morillo
The 10 Memes That Defined 2022
By Alexis Morillo
This AI Filter Shows How You’d Look In Different Time Periods
By Alexis Morillo
Get Even More From Bustle — Sign Up For The Newsletter