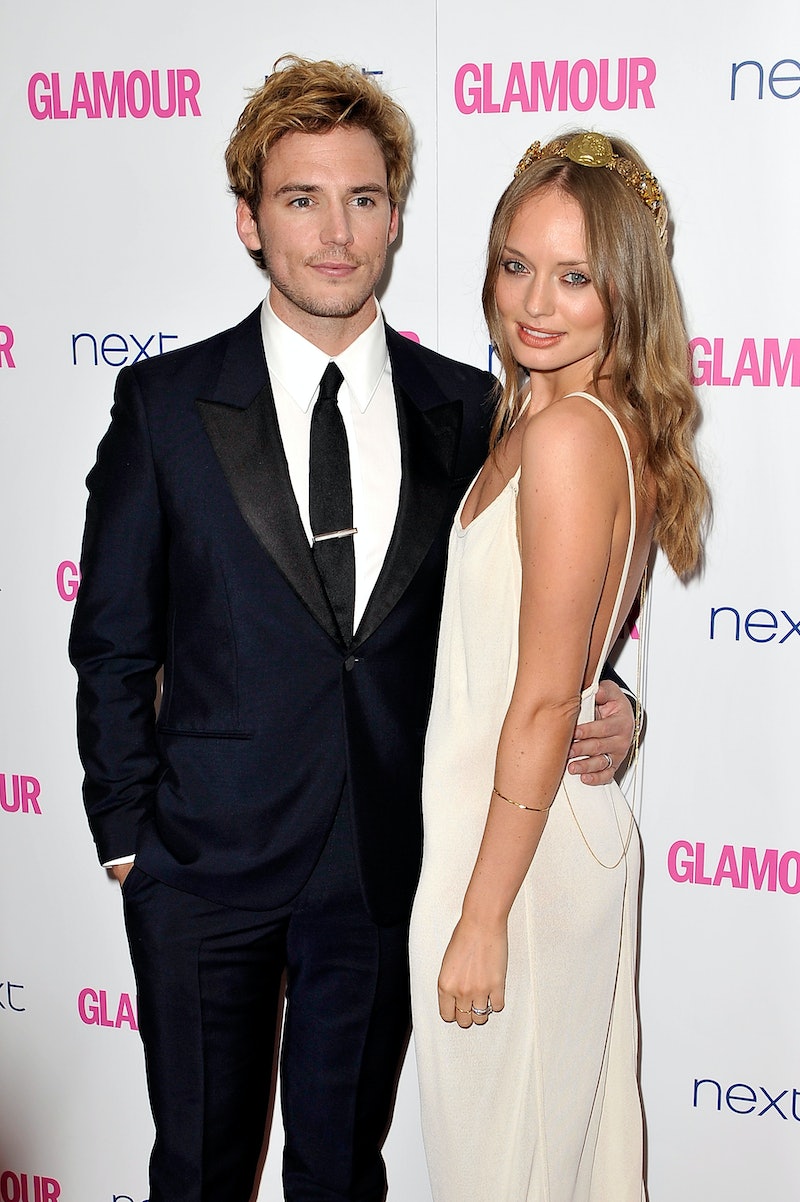 Before Brad Pitt and Angelina Jolie joined the Celebrity Secret Wedding Club, the Hunger Games' Sam Claflin wed Laura Haddock in a ceremony that would've gone completely under the radar... were it not for Instagram. At that point in mid-2013, Claflin had already garnered attention on the Internet for being, essentially, an attractive Englishman for his supporting roles in Pirates of the Caribbean: On Stranger Tides and Snow White and the Huntsman. So, once Insta shots from his quiet nuptials with Haddock surfaced, they made it to Tumblr, and the jig was up. But how did Sam Claflin and Laura Haddock meet in the first place? Let's explore the love story of these theatrical Brits.

The couple got hitched in a private ceremony on July 30, 2013, right as the groom's star power began to rise. Claflin was set to star in The Hunger Games: Catching Fire as Finnick Odair that fall — a highly anticipated and career-making role. And, he was famous enough that people on the Internet cared that he got married to an equally attractive lady. Combined attractiveness aside, the couple's adorable story will make you love them even more.

Haddock herself is an actress. While most of her credits are in British television and film, Haddock played a small role in this summer's biggest film. Haddock was Meredith Quill Star-Lord's mom in Guardians of the Galaxy. Mind. Blown. Naturally, this couple's story begins in a scenario all too familiar to actors: the audition room.

Claflin told Yahoo! about their professional meet-cute, which he described as "the sickliest story ever." Well, you be the judge:

I walked into an audition room, I saw her and I knew. I’m not kidding for the life of me. She was reading in for a part and it’s my fourth free call. I’ve done previously three auditions with this other girl reading and this girl walked in and I walked out the audition, couldn’t care less if I got the part. I called my agent, I said, 'Mate, I am in love.' He’s like, 'How did the audition go, mate?' I was like, 'No, no, you don’t understand. I have just met the woman I want to marry.' Then, that evening, I want [sic] to a party in East London and — the story goes on for hours. {Laughing} I went to a party in East London and at 5:00 a.m., I stayed up all night having fun with my friends, got on the first tube or the subway home, got the subway doors opened at my stop, she was standing there.

Sure, this is adorable and awkward and straight out of the rom-com playbook. But, this is how I image it went down:

Claflin walks in and sees Haddock, and has one of those love-at-first-sight realizations. But, this means he can't blow it.

So, Claflin tried to be all suave to impress her.

He can't seem to read Haddock's mind, despite their instant connection, so Claflin leaves the audition a bit flustered.

I mean, wouldn't you if you just met the person you were going to marry and didn't do anything about it? But, what's meant to be will sort itself out. So, as luck will have it, they meet again — of all places, in the London tube. (Talk about a Missed Connection fantasy come to life.)

This time around, Claflin weighs his options. Should he play hard to get?

Should he show off his strengths?

Spear-wielding might be inappropriate, given the setting. In the end, he decides he must fight... for her attention.

And it just so happened to work out for the lovely thespians. I mean, do you think she really needed that much convincing?

Claflin reflected about his wedding with Haddock a year later. He told Glamour UK ,

Getting married was easily one of the greatest achievements of the past 12 months. To have a wife with such [a] wondrous, creative imagination, who planned every inch of it, made the day all the more special. Every five seconds I find myself falling harder and deeper in love with her.

A year in, they're still ridiculously adorable.

More like this
Kumail Nanjiani & Emily V. Gordon’s Relationship Timeline Is Literally A Movie
By Jake Viswanath
Olivia Wilde & Harry Styles Are Reportedly "Taking A Break" After Almost 2 Years
By Jake Viswanath and Radhika Menon
The 'Love, Lizzo' Harry Styles Scene Is Just 1 Moment That Made Fans Feel Seen
By Brad Witter
Robert Downey Jr.’s New Film Is A Tender Story of Fatherhood & Forgiveness
By El Hunt
Get Even More From Bustle — Sign Up For The Newsletter