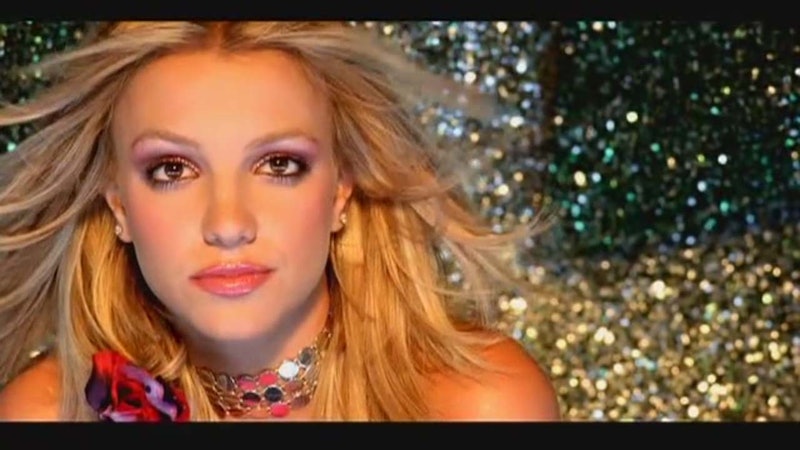 After Britney Spears kicked the pop music world in the face with Lolita-next-door-no-more song "Oops!... I Did It Again" and its red catsuit-tastic music video, fans needed time to recover. “Lucky” was the second single off of 2000’s Oops!… I Did It Again, and it was the perfect follow up: a sweet, seemingly lighthearted bubblegum pop tune.

However, if you break out the CD booklet, you'll find that the lyrics tell the tale of a major celebrity who has the world at her perfectly manicured fingertips, yet feels like her life is empty. (Uff da, amirite?)

In the music video, we meet Lucky: A sad, award-winning actress who just can't find happiness. As Britney explains in the Making The Video special, Lucky seems to have it all but "never really has time for herself ... She's lonely. It's kind of depressing."

I never want to disagree with Britney, for she is my everything, BUT! I revisited the music video Friday morning for the first time in probably a decade, and I didn't see "sad actress." I saw "actress who is being followed around by a phantom." In the video, Britney plays four characters: Storyteller Britney, Lucky, Glitter Star Britney, and Phantom Britney.

Without further ado, here is my interpretation of the "Lucky" music video:

"This is a story about a girl named Lucky... and Phantom Britney... and Glitter Star Britney."

Phantom Britney walks along a Lucky billboard. If I ever win a major cash prize, I'll rent a billboard and hire someone to paint an exact replica of this:

Lucky doesn’t just sleep in the most gorgeous robe ever. She also sleeps on a pile of feather boas. But she doesn't sleepy soundly, for she is haunted:

Phantom Britney watches from her billboard (P.S. That lace-up fly is so fly!):

She can't rest, for she can detect Phantom Britney's eyes on her. (Nothing compares to that robe):

Phantom Britney shows off her bracelet made out of gift wrap ribbon:

Within the last few years, I'd considered buying some of the Hollywood Regency Sims accessories to recreate this (I chickened out though):

Glitter Star Britney is watching over you, Phantom Britney and Lucky:

Phantom Britney is watching you, Lucky:

So beautiful, so haunted by phantoms:

HOW'D PHANTOM BRITNEY GET IN THE APARTMENT?

THERE ARE TWO PHANTOM BRITNEYS (PLEASE NOTE THE ARM AT THE EDGE OF THE FRAME). WATCH OUT, LUCKY:

A Phantom Britney is growing out of Lucky's arm:

But Lucky can sense her. Phantom Britney tries to touch Lucky's face, but she has no such luck...y. Lucky moves away in the nick of time:

Phantom Britney plops down next to a pile of feathers. What was the feather budget for this video?

Lucky looks at her reflection, but doesn't see Phantom Britney. Even so, chills run down her spine:

Lucky answers the door and finds this stern-looking dude:

She faints in his arms. IS HE PHANTOM BRITNEY IN DISGUISE?

A director yells "cut." Oh. It's just a movie. The man with the slick hair is an actor. He's not Phantom Britney:

Lucky attends an award show that is held on a Red Carpet:

Please note the blonde guy won’t stop slam dancing next to the stage:

Like, cannot be tamed (is he possessed by Phantom Britney?):

Glitter Star Britney checks out the other stars, considers relocating:

Lucky basks in the glitter:

Gasp! Phantom Britney is at the award show:

Phantom Britney stares at Lucky from the other side of the velvet rope:

Lucky finds the missing mirror in her limo:

“Come hang out on a billboard with me, Lucky. Be my friend!”

But Lucky ultimately chooses to roll up the window and leave:

Phantom Britney returns to her billboard without Lucky:

"I'll get her next awards season."