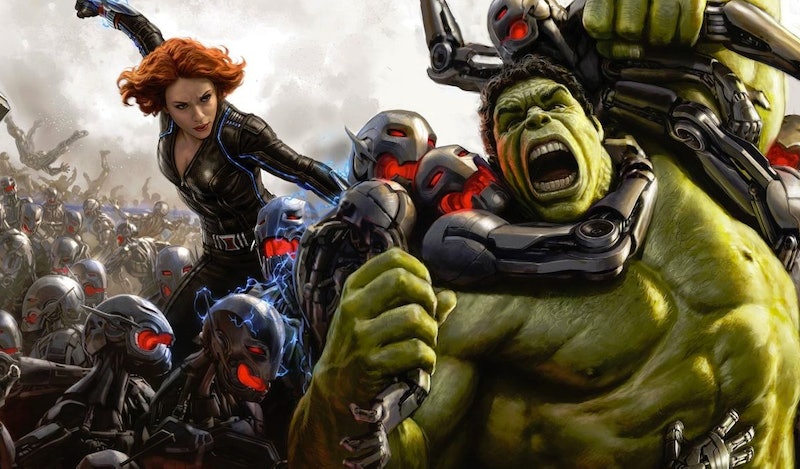 We've still got a while to go before Avengers: Age Of Ultron graces our local movie theater screens, but this press train is guaranteed to be an epic one. In fact, enough's trickled out about Age of Ultron that at this point, we've got a pretty good idea of a couple of its surprises, if not the ones that'll really get us amped in that theater in 2015.

So let's explore some of what Age Of Ultron's got in store for us. It seems damn dramatic, that's for sure. As Joss Whedon just told Empire, "It's more epic and in other ways it's more noirish and suspect and devious and specific." Alrighty then. What might that look like?

We don't really know the context in which Atwell's Carter will appear — maybe a dream/hallucination sequence or a flashback, considering she's based in the 1940s and Age of Ultron is in the now. But we do know that she's filmed a scene for the movie: Atwell confirmed as much to EW. Here's The Mary Sue's Rebecca Pahle describing the rumor surrounding her scene(s?):

A few months back [Atwell] was spotted with Chris Evans on what looked like an old-fashioned dance hall set, complete with “Lindy Hop dancing” extras. That indicates the scene is set in the ‘40s. But Paul Bettany, who plays The Vision, was there too. So… time travel? Or something?

Not all is well in Science Bro Town. Tony Stark's "Hulkbuster" suit — designed by Stark to be able to go head-to-head with the often unbeatable Hulk, just in case things get out of hand — was spotted in the back of pics already, and we all know that one falls under the "don't introduce a gun in the first act unless it's gonna come back by the third." Mark Ruffalo's also talked a bit about the conflict:

It can’t just be a good fight, it’s gotta be about something. And the great thing in Age of Ultron is, that fight between [Hulk and Tony Stark] is, nobody wins when two people who are friends fight.

Joss Whedon also broached the topic of the Hulkbuster in more recent comments to Empire:

It makes sense because there's no one who can really go up against Hulk, but more importantly, those guys are best friends, so what that battle is and what it means is fascinating to me.

That can only lead happy places, right? Right?

It's a bespoke suit. The back-up plan in case things go awry.

I'm gonna go out on a limb and say things go awry. Just an instinct.

Ultron Will Stir Up Some Shit

This should be evident from the title and the fact that he's a villain, but yeah. Dude's gonna cause some carnage. Created by Tony Stark as "self-aware, self-teaching, artificial intelligence" according to EW, Ultron's "designed to help assess threats, and direct Stark’s Iron Legion of drones to battle evildoers instead." But things going awry will likely be a theme in Age Of Ultron , because alas:

Ultron sees the big picture and he goes, ‘Okay, we need radical change, which will be violent and appalling, in order to make everything better’; he’s not just going ‘Muhaha, soon I’ll rule!’

A potential new Avengers line-up in the post-credits

There are two important things to remember when it comes to the future of the Avengers movies: 1) There's no way all those actors are gonna stay signed on forever, and 2) the Avengers line-up is constantly shifting in the comic book world. The combination of these two things makes it pretty likely Marvel will be looking to change things up sooner or later, and so far signs are pointing to that "later" starting in the Age Of Ultron post-credits. According to Badass Digest:

At the end of Age of Ultron Cap will assemble a team that is a mix of familiar and new faces, leading forward into Phase Three. It's an exciting mission statement for Marvel Studios, letting audiences know that the Avengers team is more than just the guys who were in the first film. The make-up of that team is, technically, up in the air until that scene is shot (I suspect it's being saved for either scheduled reshoots or will be snuck into the schedule of Captain America 3, which goes before cameras early next year), but Joss Whedon's script did indicate who would be on that team. I won't reveal all the names - and some have changed in between drafts, by the way - but one character who has always been in this new team is Captain Marvel.

An Introduction of Captain Marvel

If they're introducing a new line-up at the end of Avengers, I'm personally hoping they're planning on peppering in some of those new characters throughout the film itself. What if they just dropped Carol Danvers in there, either before she's endowed with her powers or after she's already taken on the Ms. Marvel title? If there's any great launching point for a solo movie or further involvement, it's here.