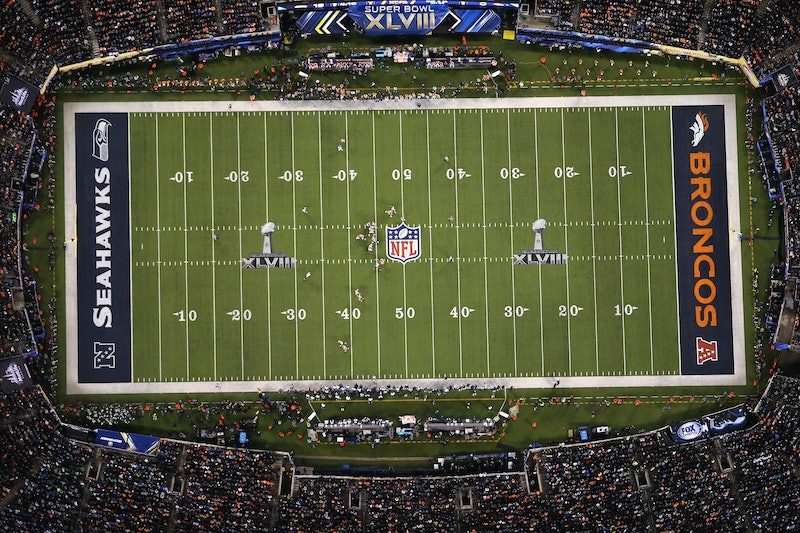 You know how life is — one minute you're walking along as a perfectly intelligent, competent human being, and then your feeble lady brain takes over and suddenly everything in life not related to make-up and relationships and the color pink just goes right out of your head. At least that's how ESPN's new Fantasy Football advice for women seems to think women operate. I'm only slightly exaggerating.

In a new blog post on ESPNW, the network's site for women, ESPN introduces the Sisters Williams, a trio of female siblings who will help women figure out the art of Fantasy Football in the most stereotypical way possible. According to their post, these life long football fans will "simplify things" for us by using "a simple relationship-based rating system that cuts through all of the clutter." In other words, they explain how valuable players are by using relationship metaphors. A very valuable player is explained as metaphoric "Marriage Material." A decent placeholder becomes "It's Complicated." You get the idea.

There's so much going on here, where do I even start?

I mean, for one thing, this is all unapologetically heteronormative, what with the categories of "Boyfriend Potential" and even "Marriage Material," given the fact that marriage isn't possible for a lot of women in a lot of states. And even beyond that, it automatically assumes that relationship vocabulary will be the most intuitive for women, because obviously that's what we devote most of our brain power to anyway, right? Like, we couldn't possibly use the (much more straight-forward) language of careers or anything. Women are so naturally attuned to relationships that it's much easier to see who has "Marriage Material" than "CEO Material," after all.

But even beyond the heteronormativity and the insulting stereotypes ESPN just takes for granted here, the worst part about this whole thing is the simple fact that they feel the need to dumb fantasy football down for women. After all, ESPN already has introductory material for people looking to get into fantasy football, stuff that doesn't talk down to the audience. But apparently women aren't smart enough to understand all that. I guess because of those pesky lady brains.

The whole thing is ridiculous. Billion dollar industry or not, fantasy isn't exactly rocket science. Women have figured out stuff way more complicated than picking an imaginary football team. They have even occasionally done so without anyone making up sexist and reductive metaphors to help them understand. Shocking, I know.

If ESPN wants to appeal to women, that's great. But the solution is not to remake their existing content with an added mix of sexist stereotypes. They could just try things like including more actual women in their regular content, paying more attention to women's sports, maybe even — gasp — unambiguously condemning the violence against women done by some professional athletes, and just generally acting like women can be a normal part of your audience. This shouldn't actually be hard, guys.

More like this
Footballer Jake Daniels Shared His Thoughts On A World Cup Boycott
By Sam Ramsden
Wimbledon Alters All-White Kit Rule Amid Candid Period Discussions
By Catharina Cheung and Rachel Mantock
35 Genius Secret Santa Gifts For Someone You Don’t Know Very Well
By Rebecca Deczynski and Lauren Grant
Here’s Your Daily Horoscope For December 2, 2022
By Mecca Woods
Get Even More From Bustle — Sign Up For The Newsletter