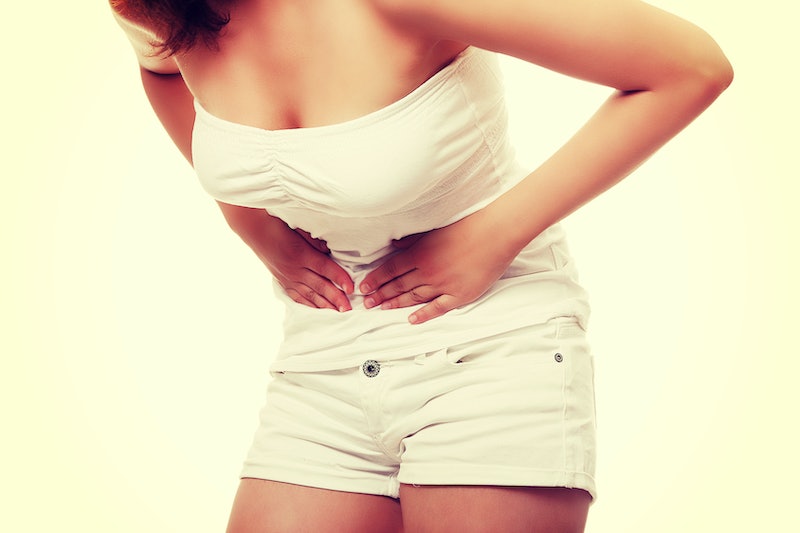 Feeling like you gained five pounds in five minutes is an unpleasant experience, and not for reasons having to do with appearance. Complaints of bloating are common, and while this abdominal-area discomfort affects many, the word is heard extra-frequently because it describes multiple conditions.

Dr. Lisa Ganjhu, D.O., clinical assistant professor of medicine at NYU Langone Medical Center, deals with many cases of bloating and, as a gastroentorologist, works to discern the causes and help patients understand their symptoms. According to Ganjhu, there are two main varieties of bloating.

Water bloating is essentially caused by overeating or drinking. The more common form of bloating, however, is air bloating, which is at least partially synonymous with plain old gassiness. There are numerous causes: swallowing air (something we all do, just to different extents), eating foods we don’t digest well such as fake sugars, and eating foods of which our bodies are intolerant (i.e. lactose intolerants drinking milk), and even stress and anxiety — which actually slows our digestive systems.

Women are more frequent sufferers of bloating and Ganjhu believes the reasons for this are, at least partially, societal. Because flatulence is more acceptable among men, women are more likely to put strain on their stomachs by making an effort to suppress their gas, which, in turn, leads to feeling bloated.

How can we reduce and prevent bloating? Obviously (and unfortunately) gas is inevitable (and natural!) but there are things we can do to alleviate some of the varied discomfort that we classify as bloating.

Holding a plank is even better for you than you thought. Ganjhu says by increasing your girdle strength you can actually build muscle that helps prevent the belly from expanding out. Though any core strengthening will work, Ganjhu recommends Pilates.

We already told you about foods that reduce bloating (think celery, watermelon, and rice). Conversely, be aware of foods that can trigger bloating — and some of them are surprising.

Here are a few tips:

If you’re already feeling bloated, Ganjhu advises taking something simple, such as the over-the-counter GasX, and though it may seem counterintuitive, drink lots of plain old water.

Drink Through A Straw

This simple swap helps reduce the air you swallow when hydrating. Also, if you’re a gum-chewer, try switching to mints as they involves less air intake.

Get A Good Probiotic

Say what? Basically, FODMAP is an acronym for nutrients to which many people have bad digestive reactions. They’re in an overwhelming amount of foods, making them good to be aware of, but no need to be terrified. Ganjhu’s best recommendation on this front is to both know and pay attention to your body. If you are gluten intolerant, don’t eat bread. If you have high stress levels, IBS, or other digestive problems, you may want to pay more rigorous attention to the FODMAPs. Here’s a helpful infographic for IBS sufferers looking to cut down on FODMAP-containing foods.

And, by the way, don't be too hard on yourself when you are gassy. Excuse yourself and go to the bathroom, for real! You're saving yourself from more pain later; and, as gastroentorologists know especially well, it happens to the best of us.