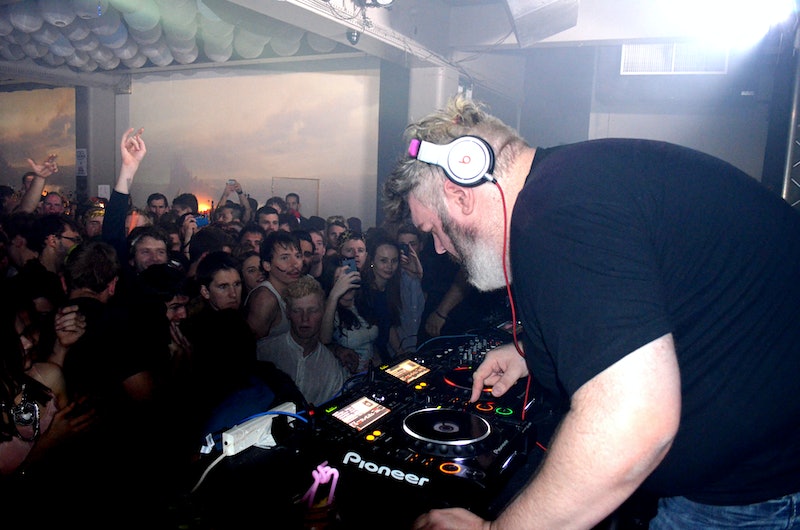 We all know Hodor as the gentle, linguistically challenged giant who diligently carries around Bran Stark on his back throughout Westeros on Game of Thrones, but August 28 in Brisbane, I donned full Daenerys garb and attended Kristian "Hodor" Nairn's Rave of Thrones tour (set to hit New York in October), and watched as Hodor carried one more thing: the party vibes (and my embarrassingly bold brand of fandom).

It really needs to be said from the outset, though, that Nairn is not actually Hodor, but a charismatic, down-to-earth Irish actor — and very talented house DJ. And while basing a DJ set on a well-known fantasy character may seem like just another celebrity affectation, Nairn was a regular on the Belfast club circuit long before he auditioned for Hodor. For Nairn, Rave of Thrones is the perfect combination of his two careers.

I found all of this out rather awkwardly prior to Nairn’s set when I accosted the poor fellow in Brisbane's Chinatown. I saw a hulking figure flanked by two ironically much smaller chaperones wandering into a nearby car park and without a second thought, I started sprinting after him — not an easy feat in a head-to-toe Khaleesi getup — screeching “HOOODDOORRR!!”

This would be quite confrontational, especially considering the actor had just taken a long haul international flight, but as a testament to his mind-boggling popularity and genuinely genial nature, Nairn didn’t bat an eyelid. Instead, he happily posed with me while I took 10 million selfies and begged him to tell me who Jon Snow's parents are. He didn't spill the beans, obviously, but did say he was "so fucking jet lagged."

But after finding out just how nice Hodor's talented real-life counterpart could be, I made my way inside. With costumes made “compulsory” for Rave of Thrones, characters from across the seven kingdoms packed into Brisbane’s Oh Hello! club for the second performance of Nairn's tour, following (of course) the debut Sydney set the night before. Everyone from Drogo, King Joffrey, Ygritte, and Dany (minutes after her dragons were born out of Drogo's pyre) made it out for the GoT star's DJ debut:

Falcona, the show's promoters, spared no expense in production with a hilariously clever audio-visual introduction, the highlight of which featured an unexpected Snoop Dog in Winterfell mash-up and some wild GoT sex scenes cut-up to Kanye’s "Bound 2" video. At this point in the show all eyes were glued to the walls in a strange crowd symmetry. The video was a beautiful work of art full of glorious sunrise scenes and galloping horses. And Kim Kardashian dry-humping her man on a motorbike while he raps about banging her — not a dry eye in the house and very GoT.

While Nairn's DJ set wasn't quite as robust as the intro — think fit-inducing strobe, clouds of smoke and psychedelic pyrotechnics — he took to the decks like a natural. It was no sweat (not literally — DJ-ing is very sweaty business) for him to pump out a 90-minute set of bass-driven beats that had the fanatical crowd chanting "Hodor" throughout the night. And in case you're wondering what Hodor's music tastes are in real life, the set started with some vocal-based deep house and progressed into more mid-'90s influenced EDM later in the night. Nairn is no one-trick pony.

Of course, regardless of Nairn's talent, many of the show's attendees seemed more concerned with the novelty of being seen at a Game of Thrones DJ set than actually paying attention to the set itself. While I was on stage endlessly snapping shots of Nairn, I looked down to find a girl perched on the stage near my feet, totally engrossed in her Facebook feed, and another a meter or so away determined to take the perfect pouty selfie.

Another attendee kept jumping up in front of my lens with fluorescent glasses and a goofy grin trying to bomb my pictures. The first time I kind of politely smiled and chuckled, but by the fifth I was getting testy. OK, so jumpy rave glasses girl may have gotten under my skin, but it sparked the realization that not much has changed since my first high school dance. Not even in "Westeros." People are pretty much the same, and despite Nairn's Rave of Thrones epic set, the same obnoxious concert types were out in force — with a slight Game of Thrones twist.

The Soppy, Amorous Couple (aka The Season 1 Drogo & Dany Set)

The guy may have his arms around her waist or she could be clutching him feverishly by the hand. Either way, they can’t move through the crowd separately. Instead, they remain one swaying, kissing unit. They continue to sway and kiss until you're ready to tell them to go hang with the moon and stars outside.

The Party Girls (aka The Season 1 Sansa Starks)

OK, so these types are the ones who see “dress up” and come in their favorite sexy bunny outfit. Their lips look like they are moving the same as everyone else’s, but when you look closer, they are actually shouting "Mordor" instead of "Hodor." And despite thinking the cover charge was expensive and silently wondering whether GoT is a computer game, they manage to saunter to the very front of the mosh pit (!) to take selfies, of course.

I often also call this person the premature mosher. You know the one, in the front row, wildly brandishing glow sticks and weeping out of sheer delight. This is not drug-induced behaviour, they are honestly just having the best time ever. Due to overexcitement and lack of self-restraint they launch themselves into a flailing fit of limbs at the first sign of a bass drop.

The Haters (aka The Cercei Lannisters)

Just like Cersei Lannister, the hater is out to ruin everything. The hater is too cool to dress up for a GoT themed rave (!) and thinks paying $8 for a beer is ludicrous.

The fist-pumpers (aka The Theon Greyjoys)

The fist-pumper shares surprisingly similar characteristics with the party girl. There’s at least one (or one thousand) bros who are fist- and chest-pumping their way through a show. They are usually just there to pick up chicks.

The conversationalists (aka The Samwell Tarlys)

The absolute best time to go into a personal conversation about all of the problems in your life is definitely while at a GoT-themed rave. These folks sit or stand extremely close and scream at ear-splitting volume why brunch is so much better than breakfast. They ignore all of the talented supporting artist sets and disappear into the depths of the mosh pit the minute they see Hodor.

People in Ridiculously Tall heels (aka The Wall of Giants)

You wondered what it feels like to be Tyrian Lannister? As with any show you go to – you need to be prepared to be shielded from view by three to five of the tallest people you have ever seen in your life. This sounds like a made up statistic, but mark my words, you'll meet these folks at any show. Especially a GoT-themed one.