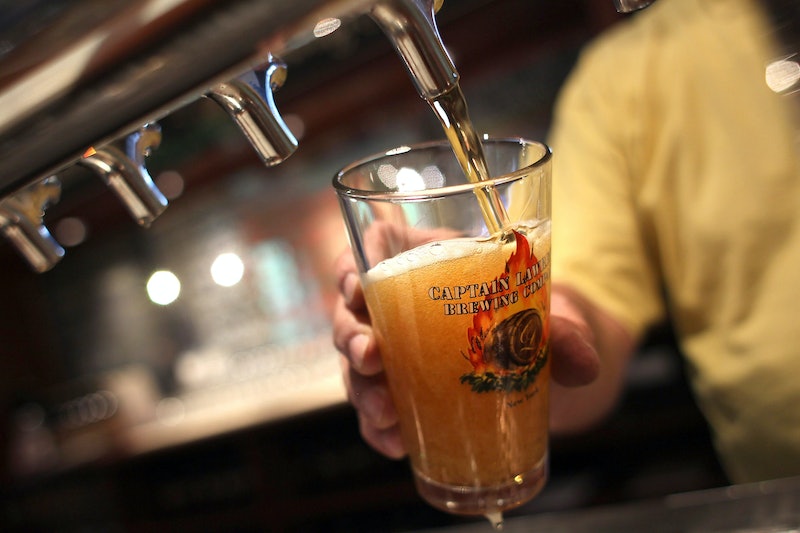 Autumn is making its descent upon New York City; you’re thirsty, and your newly minted man friend suggests the two of you march on over to the circa 1906 Lexington Armory for six hours of unlimited tastings of 150 craft beers from 75 breweries all over the world, because craft beer festivals are the best. In a word, YESPLEASE.

After a few minutes of jumping, screaming, and running in place, you remember why the New York City Craft Beer Festival (and brew festivals alike) make you lose your shit. For starters, not only does your money provide access to 150 eclectic brews from Delaware to Munich, but a portion of your ticket purchase is also donated to cancer research efforts by the Leukemia & Lymphoma Society. So just by saying yes, you’re pretty much a philanthropist, sans ice bucket.

Upon entry into the 177,000-square-foot national historic landmark that is the Lexington Armory, you suddenly realize three things:

What's a (classy) girl to do? Fear not, homeslice. Here are my five tried-and-true strategies to help you navigate a craft beer festival, and remember it the next day.

Strategy No. 1: For the love of god, eat the free samples

Remember to soak up some of those delicious hops with (free) food. The pure heroin that is the Potlicker Carrot Cake jam pairs beautifully with a stout, while the salt and sting of the Torchbearer sauces and tortilla chips will leave you pining for more wobbly pop. Just remember to save the Trinidad Scorpion Pepper Sauce for last, or DOOM:

Don’t like? Don’t swallow! Contrary to amateur belief, those little buckets next to the taps aren’t summer seasonal magnums — they’re there for your spitting and dumping pleasure. And most vendors will provide water for rinsing your mouth and glass, leaving more room for Gouda and fatback bacon sammies. World, you’re welcome.

Between Instagram, Twitter, and Facebook, we often forget about those antiquated things called real life human beings. That aforementioned heavy-handed beermonger is a person with a story — she’s a daughter, friend, partner, and employee who willingly ditched the nine-to-five cubicle for a life of trade-show travel and barley science. Ergo, she’s gotta be cool.

Strategy No. 5: Ditch the bike and take the train

What better way to remember your first craft beer festival than with sweet, sweet souvenirs? The carrot cake jam sample was just too good to pass up, so you bought some (in bulk) and need to transport all that divine nectar home. Oh yeah, and you’ve been drinking for six hours and bike DUIs are a real thing, so lock her up, pack up those two-ounce souvenir glasses, and hop on the closest choo-choo. The bonus travel time will give you the opportunity to plan your volunteer hours for next season’s craft beer festival. Because let’s face it: At this point, you’re pretty much a craft beer connoisseur. And you’ve got the memories to prove it. Cheers to that.