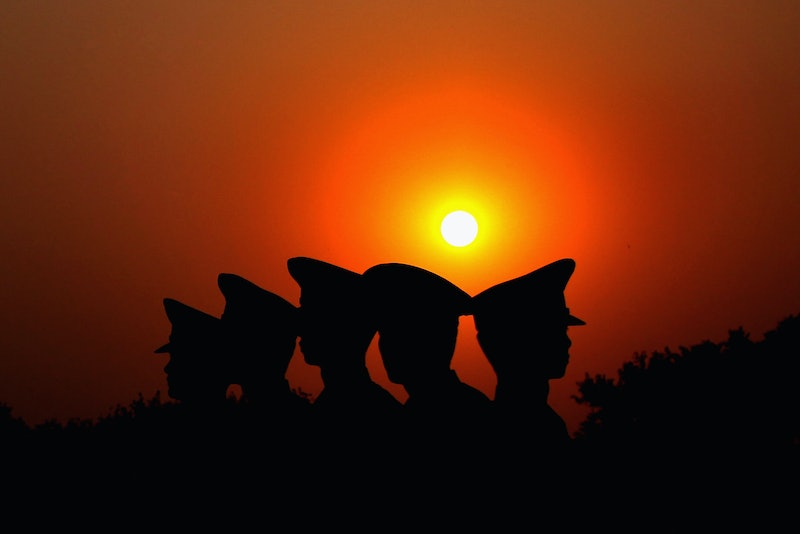 Things aren't looking good in Hong Kong. The long-standing tension between the citizens of the sprawling city and the Chinese government may soon be coming to a head, and over a familiar topic — democracy, and the right to elect its own leaders. That's because China's parliament endorsed veto authority over Hong Kong candidates Sunday, a move which has inflamed criticism from pro-democracy advocates in Hong Kong and around the world. In short, the dream of a fully democratic 2017 election in Hong Kong is looking dim.

And reportedly, those standing against the parliaments' move aren't planning to back down quietly — quite the contrary. According to Reuters, pro-democracy activists are threatening to shut down Hong Kong's financial district by means of widespread protest.

Basically, this conflict dates all the way back to 1997, when control of Hong Kong was handed over from British colonialists to the Chinese government. Since then, Hong Kong hasn't been able to vote directly in an election for their Chief Executive, but that's slated to change in 2017.

But in a move activists view as engineered to maintain Chinese political control, the Standing Committee of the National People's Congress put an extra step in the process — candidates can only appear on the ballot after nomination by a 1,200 member body, which is expected to be chock-full of loyalists to China's ruling Communist Party. In other words, the people of Hong Kong can freely vote — for whoever the nominators decide they're allowed to.

According to Al Jazeera, things have been running hot between the Chinese government and the Hong Kong democracy movement lately. Media magnate and pro-democracy advocate Jimmy Lai, for example, had his home raided by police on Thursday. Lai is a vocal opponent of the ruling party — the authorities, according to The Guardian, asserted that the raid was due to allegations that Lai had bribed elected officials.

The campaign to counter the election process decision is already underway, however, and you may find their name familiar — the "Occupy" moniker is in full-swing in Hong Kong, in the form of "Occupy Central With Love and Peace." According to Reuters Joseph Cheng, the convener for the Alliance for True Democracy (a collection of pro-democracy and right-to-vote organizations in Hong Kong) minced no words in condemning the parliamentary decision — and calling for public action in response.

[The decision] leaves no room for us to fight for a genuinely democratic system, and we will begin our campaign for peaceful, non-violent struggle. We want to tell the world we haven't given up. We will continue to fight.

There's quite a bit of time yet before the elections will be held, so it'll be interesting to see whether a burgeoning protest movement can make any progress, or give any pause to the Chinese government's decision-making about this — suffice it to say, with the eyes of the world watching, this struggle is only getting started.