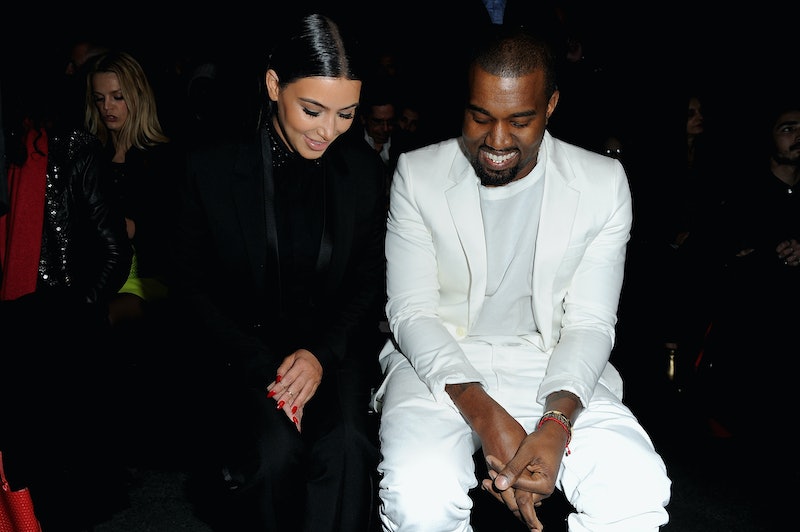 In early August, Kanye West and Kim Kardashian passed a momentous milestone, when their marriage reached its seventy-third day without either party filing for divorce. OK, so that's not a major event for most people, but it meant that Kimye have officially lasted longer than Kim's previous marriage, to NBA player Kris Humphries. That relationship ended on October 31, 2011, after just 72 days of wedded bliss. And now that fans finally get to see Kim and Kanye's wedding on Keeping Up with the Kardashians, I can't help but look back at her last one and wonder if Kanye was at Kim and Kris' wedding.

The Kardashian-Humphries wedding was a huge event, with over 400 guests in attendance, including celebrities like Ryan Seacrest, Eva Longoria, Demi Lovato, and Lindsay Lohan, according to People. But one famous face was absent: Kanye West. It's not clear whether he was invited and couldn't come, or if Kim chose to leave him off the guest list. But considering the now-spouses have been friends since 2004, according to Hollywood Life, it seems unlikely Kim dissed her future husband by excluding him from the wedding.

Kanye reminisced about how he first met Kim on Kris Jenner's short-lived talk show, as explained by Hollywood Life. He said it was back when Kim was still an unknown, working as Brandy's assistant. Kanye and Brandy were recording their 2004 collaboration "Talk About Our Love" and Kim was helping Brandy in the studio when Kimye first laid eyes on one another. That was all three years before Kim's sex tape with Ray J (Brandy's brother) was released and E! turned the Kardashians into the most famous family in America.

So Kim and Kanye had known each other for eight years before they started dating in 2012. As they both became more famous, they continually saw each other at industry events. Khloe Kardashian told Redbook, "[Kanye] always had a crush on Kim, but she was never into him at the time. I'd always told Kim they were like two peas in a pod, and she would never listen. Then one day she says, 'I think I like Kanye.' I was like, 'Since when?'"

But if the two were close for so long, why wasn't Kanye present at Kim's 2011 wedding? If, like Khloe said, he was always attracted to Kim, maybe he begged off attending because seeing her marry another man was too painful for him. On the song "Cold" from his 2012 GOOD Music compilation album Cruel Summer, Kanye raps "And I'll admit, I had fell in love with Kim/ Around the same time she had fell in love with him/ Well that's cool, baby girl, do ya thang/ Lucky I ain't had Jay drop him from the team." That last line is in reference to Humphries, who played for the Brooklyn Nets, the team Jay Z used to co-own. Zing! It's also possible that either Kim or Kris was uncomfortable inviting someone who had a crush on her.

We'll probably never know the real reason why Kanye didn't make it to Kim's wedding to Kris Humphries. All that matters now is that these two eventually got together, after years of eyeing one another from afar. And it's probably for the best Kanye wasn't at the ceremony. Those would have made for some awkward wedding pictures.