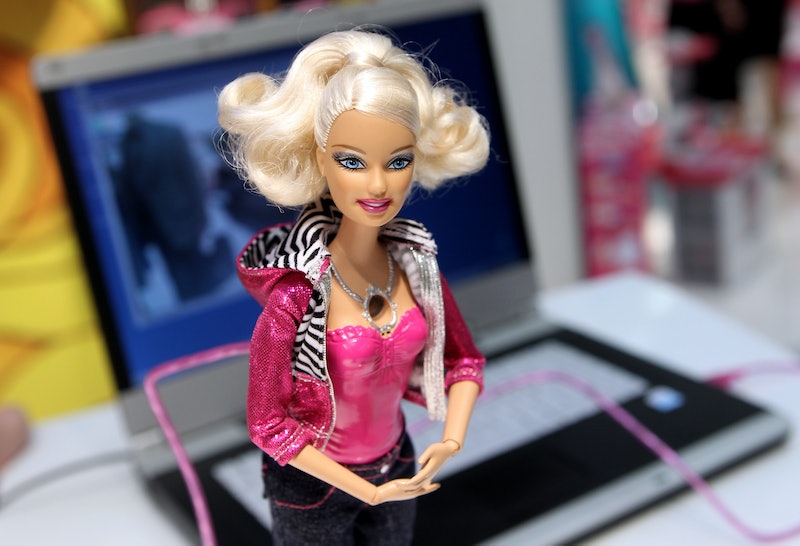 I want — nay, need — the doll eye look. You know, the kind of eyelashes popularized by English model Twiggy in the '60s, but less spider-y for the modern look. It's more Barbie-like, but the top and bottom lashes are still separated and defined, opening up the eye with doe-like proportion. It's a notoriously hard look to achieve, often accomplished with single false lashes applied very carefully, with the assistance of a makeup artist, or simply by knowing how to apply mascara properly. But who has that kind of time to invest in morning makeup? Thankfully, there are some pretty proficient products that allow you to get those ever-elusive, doll-like lashes. All it takes a little mascara and lash product know-how. Oh, and practice.

I have super duper straight lashes that refuse to curl. They are seriously defiant. So it took me lots of practice and applications, and extra curling with my trusty Shu Uemura curler after blasting it with some heat from the blow dryer. To be honest, my lower lashes tend to embrace the doll eye look moreso than my uppers, simply due to their curl defiance.

There are plenty of ways to do doll lashes. You don't need to be as dramatic as that mod '60s icon Twiggy.

Some products work better than others, so it really depends on the type of lashes you're starting out with or are blessed/cursed with. We've established that I have really straight, hard-to-curl, and dark lashes, but these products did me some service.

Katy Perry's Eylure lashes come in so many varieties to suit your voluminous needs. The Pretty lashes in the self-adhesive range are staggered and you don't need to screw around with and make a mess with lash glue. Be careful when placing the lashes and affix them before you put on the rest of your makeup. There are several options in Perry's partnership with Eylure, so you may have to play around with whichever style you prefer, but the Pretty style is my favorite for the doll look.

Manga eyes are when both sets of lashes are super defined and separated. L'Oreal's Miss Manga version of the brand's ever popular Voluminous mascara has a bushy, pipe cleaner-like brush that bends at a 360-degree angle, so you can get those hard to reach baby lashes on the bottom. It definitely coated each lash individually.

You can't totally tell from this lighting or angle, and because I was looking down, but my uncooperative top lashes fan out and the bottom lashes were separated well and much longer. I applied another coat to define them even more.

The advertising got me on this one. I was running into Walgreen's to grab a bevvie on a Saturday night when I saw model Kemp's lovely lashes in the display. I bought two tubes since it was on sale and not available at other retailers at the time, since Kemp's lashes looked like exactly what I wanted, even though Iread the disclaimer that she used inserts to achieve the look. This stuff definitely defines the lashes, thanks to the half-moon curve of the brush, but I need three or four coats to get there.

The heart-shaped brush allows you to effortlessly coat tiny bottom lashes and to separate and "grab" them, which is a critical element to this look. I'm especially a fan of what it does to my bottom lashes. ($5.99, ulta.com)

The beauty of this mascara is that it's the blackest black, which is an important element of doll eyes. I apply two or three coats and my lashes are so black and so defined that it's almost accidental.

The wand of LORAC Cobra Mascara is shaped like, well, a cobra. Not only does it look really freakin' cool, but the shape allows you to get a grip on those hard-to-reach lashes. (To be available at Kohl's)