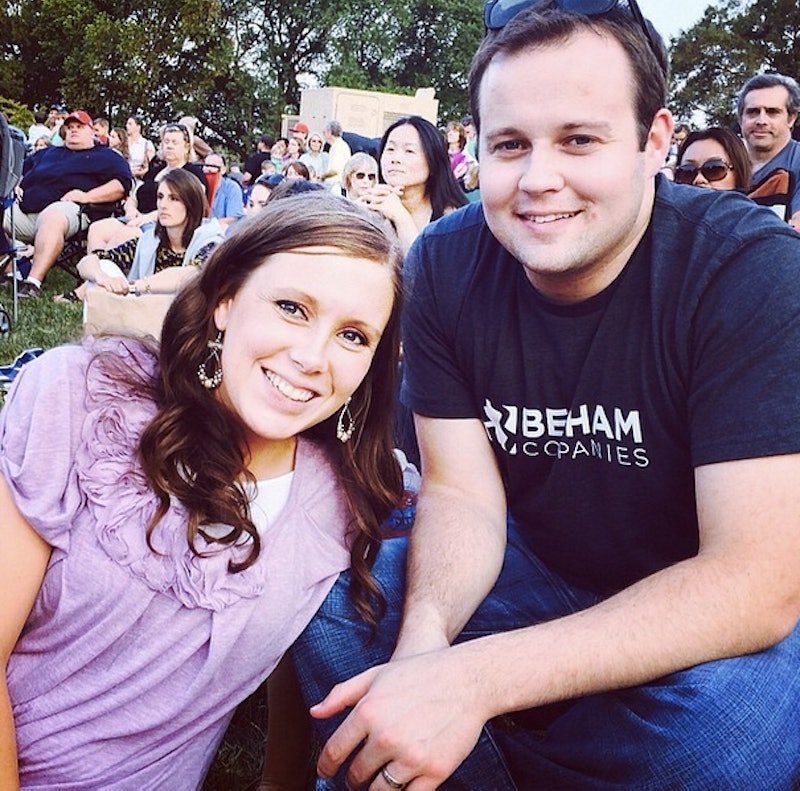 Of Jim Bob and Michelle Duggar's 19 children, only a few have left home to start families of their own. The eldest of the Duggars' 19 Kids & Counting , Josh, was the first to leave the nest and I'm disappointed with where he went — though not surprised. Sure, he's happily married to a beautiful woman and has three adorable children, but he also has a job that caters to the Duggars' rigidly conservative beliefs as the Executive Director for the Family Research Council in Washington D.C.

Josh met his wife Anna in 2006 while he was helping out on his dad Jim Bob's unsuccessful State Senate bid. Shortly thereafter, Josh and Anna entered into a courtship (read: basically, they weren't allowed to text each other "luv u bae" at 2 a.m., among other things) and were married in 2008. They had their first child in 2009, second in 2011, and in 2013, had their third. All together, they have a girl and two boys.

Last year, Josh was recruited by The Family Research Council, a Christian group and lobbying organization that advocates for socially conservative policies, which means it's pro-life and against gay marriage. Between the FRC's aims and Josh's own Instagram photos, it's clear that he's against women's rights and spends time making sure the government can control our bodies. Based on the Duggars' religious beliefs, Josh probably thinks he's doing God's work, but I for one, am not so sure.

Josh met the FRC's president Tony Perkins at a March for Life and Perkins told the Washington Post that he hired Josh for the purpose of bringing more young people into the organization. Josh spends some time at conservative rallies and promoting various family values, often with his own family in tow. But considering we live in a world where these so-called "family values" are constantly evolving, maybe the entire organization needs some new life, and not just a younger face.

Josh moved to D.C. for the job and while its bustling metro is a far cry from Arkansas, so far Josh seems to be fitting right in. Considering he's used to cameras following him on a daily basis, having political pundits scrutinize his every move shouldn't be very different. While we won't have to watch Josh advocate for these policies on 19 Kids & Counting, viewers will get to see his and Anna's home life. Still, no matter how much we watch him hang out with his wife and play with his kids, it'll be hard to forget how Josh spends his working hours.