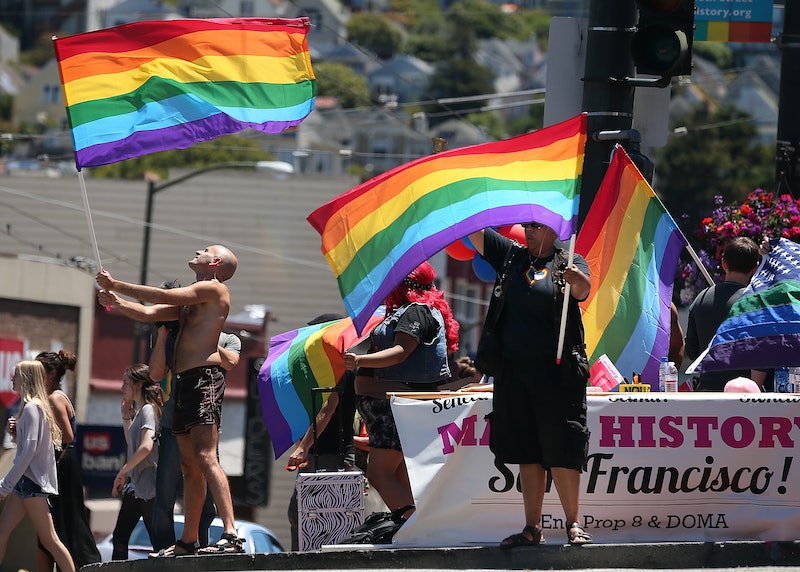 On Monday, same-sex couples in New Zealand headed to courthouses, historic locales — and even airplanes — to take the plunge into wedded bliss, as the country became the first in the Asia-Pacific region to legalize same sex marriage.

New Zealand's parliament passed an amendment to the Marriage Act back in April, but the change didn't take effect until Monday, when government offices that issue marriage licenses reopened.

New Zealand may be the first Asia-Pacific country to give same-sex marriages the stamp of approval, but it joins 13 other countries around the world who've agreed that love is love. In 2013 alone, England, Wales, France, Brazil, and Uruguay have all passed legislation giving same-sex couples the right to get hitched. The Netherlands, South Africa, Spain, and Canada have also legalized marriage for gay couples.

According to New Zealand's Department of Internal Affairs, 31 couples plan to wed on Monday. Check out the moment same-sex marriage became legal in New Zealand below:

More like this
The WAGatha Christie Verdict Is In – & The Court Has Ruled In Rooney's Favour
By Bustle UK
7 Women Share Their Best Orgasm Stories
By Lexi Inks
Are Quality Time & Physical Touch Love Languages Compatible?
By Lexi Inks
Expert Tips For Being On Top When You're Plus-Size
By Lexi Inks
Get Even More From Bustle — Sign Up For The Newsletter