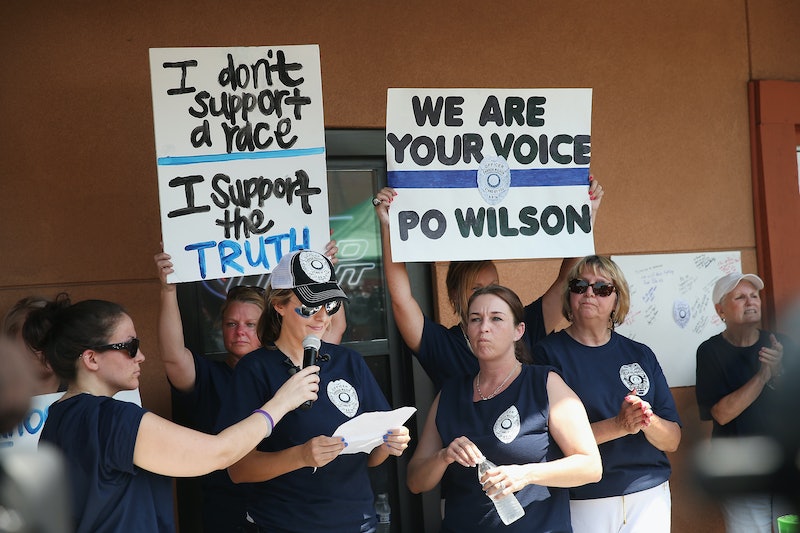 Two donations pages were made in the name of Darren Wilson, the Ferguson police officer who allegedly shot and killed 18-year-old Michael Brown. The two separate fundraisers accumulated more than $400,000 for the embattled police officer — even more than the fund established for Brown's family. But over the weekend, the two Darren Wilson donation pages stopped taking funds, and no one knows why.

According to The Los Angeles Times, the donation pages Support Officer Wilson and Support Officer Darren Wilson have been shut down by their organizers, but without an explanation. Although the pages, both of which are hosted on the crowdsourcing site GoFundMe, are still visible, visitors to the pages are unable to donate. When you click the "Donate Now" button, a message pops up stating, "Donations are complete! The organizer has stopped donations."

Meanwhile, the Support Officer Darren Wilson page — which was the first campaign for the Ferguson cop — was started by a GoFundMe user identified only as "Stand Up." However, one of the site's administrator's may be Allison Wilson, who told The Daily Beast a few weeks ago that she and her family are "not interested in speaking with the press."

Although both pages halted donations, a spokesperson for GoFundMe told The Los Angeles Times that the website didn't place a hold on donations. The crowdsourcing platform said in a statement:

The spokesperson added that although the "Stand Up" user has been mysterious to the public, GoFundMe "has been in contact with the campaign organizer and has no reason to question their authenticity." The company adds on its website that users must use their real names for "authenticity and transparency" purposes.

In a Facebook post for the Support Darren Wilson page, which is believed to be linked to the original GoFundMe page, the site's administrators confirmed that GoFundMe didn't halt the donations:

We understand your questions, concerns and frustrations with both GoFundMe accounts. Please note, NOBODY shut down the GoFundMe account because of any petitions floating around trying to close it and GoFundMe did not close them either. That decision was made by those closest to Officer Darren Wilson looking out for his best interest. We are doing our best daily to keep you updated (to the best of our ability) with all truths that come to us. That is our number one priority, to always be honest with our supporters.

In a following post, the Facebook page encouraged its followers to continue donating to Darren Wilson by purchasing supportive T-shirts, hats and bracelets.

The Darren Wilson fundraisers have sparked outrage and criticism, causing the GoFundMe pages to disable comments. The petition referenced in the Support Darren Wilson Facebook post is most likely the one circulated by Color of Change, which is demanding the removal of the GoFundMe pages and that donated funds are returned. Color of Change has accused GoFundMe of profiting from racially motive donors, because five percent of every donation goes to the company.

"Profiting off the killing of Michael Brown is not okay," the organization said in a letter.