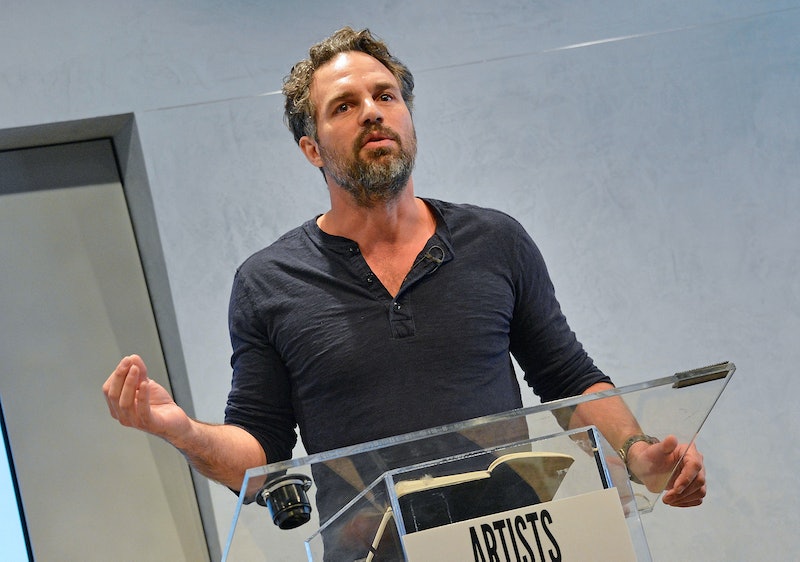 You can add this to your weird The Kids Are All Right sperm-donor-dad fantasy: Mark Ruffalo is also apparently a pro-choice activist. The 45-year-old actor gave a moving speech at a rally for abortion rights in Jackson, Mississippi this weekend, opening up about his mother's own illegal abortion.

"My mother’s illegal abortion marked a time in America that we have worked long and hard to leave behind. It was a time when women were seen as second rate citizens who were not smart enough, nor responsible enough, nor capable enough to make decisions about their lives," Ruffalo said.

"My own mother fought to make herself more than a possession; she lived her life as a mother who chose when she would have children, and a wife who could earn a living if she so chose. I want my daughters to enjoy that same choice."

There is ONLY ONE abortion clinic left in Mississippi, and it has recently filed suit over new restrictions in the state. A new state law requires that every OB-GYN at the clinic be able to admit patients to a local hospital, and according to Jackson Women's Health Organization, would force the clinic to shut its doors. A trial date is set for March 2014.

You can read the full text of Ruffalo's speech below:

I am a man. I could say this has nothing to do with me. Except I have two daughters and I have a mother who was forced to illegally have an abortion in her state where abortion was illegal when she was a very young woman. It cost $600 cash. It was a traumatizing thing for her. It was shameful and sleazy and demeaning. When I heard the story I was aghast by the lowliness of a society that would make a woman do that. I could not understand its lack of humanity; today is no different.

What happened to my mother was a relic of an America that was not free nor equal nor very kind. My mother’s illegal abortion marked a time in America that we have worked long and hard to leave behind. It was a time when women were seen as second rate citizens who were not smart enough, nor responsible enough, nor capable enough to make decisions about their lives. It was a time that deserved to be left behind, and leave it behind we did, or so it seemed. We made abortion and a woman’s ability to be her own master a Right. That Right was codified into law. That law was the law of the land for decades. My own mother fought to make herself more than a possession; she lived her life as a mother who chose when she would have children, and a wife who could earn a living if she so chose. I want my daughters to enjoy that same choice. I don’t want to turn back the hands of time to when women shuttled across state lines in the thick of night to resolve an unwanted pregnancy, in a cheap hotel room just south of the state line. Where a transaction of $600 cash becomes the worth of a young woman’s life. So that is why I am lending my voice to you and your movement today. Because I actually trust the women I know. I trust them with their choices, I trust them with their bodies and I trust them with their children. I trust that they are decent enough and wise enough and worthy enough to carry the right of Abortion and not be forced to criminally exercise that Right at the risk of death or jail time.

There was no mistake us making Abortion legal and available on demand. That was what we call progress. Just like it was no mistake that we abolished institutional racism in this country around the same time. The easy thing to do is lay low, but then are we who we say we are? Do we actually stand for anything, if what we do stand for is under attack and we say nothing? There is nothing to be ashamed of here except to allow a radical and recessive group of people to bully and intimidate our mothers and sisters and daughters for exercising their right of choice. Or use terrorism and fanaticism to block their legal rights or take the lives of their caregivers. Or design legislation that would chip away at those rights disguised as reinforcing a woman’s health. I invite you to find your voice and let it be known that you stand for abortion rights and the dignity of a woman to be the master of her own life and body. I invite you to search your soul and ask yourself if you actually stand for what you say you stand for. Thank you for being here today and thank you for standing up for the women in my life.