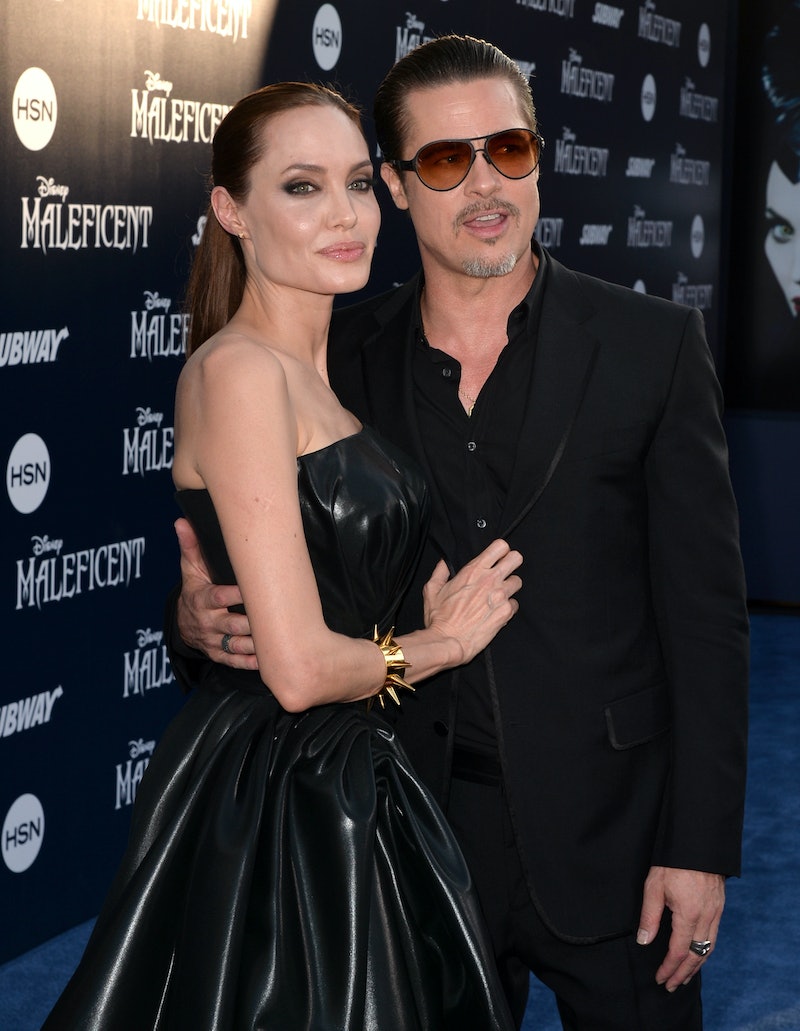 It is just so like Brangelina to throw a magical, secret wedding that they let their kids plan and to have magical, sweet photos to match. Would we expect anything less from them, honestly? Brad Pitt and Angelina Jolie got married in a secret ceremony in France last week and on Tuesday, People and Hello! released the first photos of the Jolie-Pitt nuptials. So, what will the Jolie-Pitts do with the cash they undoubtably made off of their wedding photos? Other than set some aside to jump-start their children's future wedding planning business (I mean, duh), the couple might be planning to donate the funds to charity, like they've done with the profits from past collaborations with People. Because, again, that'd be so like them.

The Jolie-Pitts granting People the exclusive rights to their wedding photos marks the fourth time the couple has sold personal photos to the publication. In fact, the sale of the first photos of their newborn twins, Knox and Vivienne, in 2008 to People and Hello! is considered the most expensive celebrity baby photo deal to date at $11 million. And, in typical Brangelina-style, the couple donated the profits to their Jolie-Pitt Foundation. Before Vivienne and Knox's birth, Brangelina sold the first photos of Shiloh in 2006 and Pax in 2007 to the publication as well for considerable sums that later went to charity.

What does all of this mean to the Brangelina wedding photos? I have a feeling that they ran People a lot more than $11 million, considering how well-kept the secret of their nuptials actually was and the fact that no one expected this to happen. So, how much did Brad and Angie make off of their secret French wedding photos? Let's take a look at the numbers.

According to Access Hollywood, Jolie and Pitt were paid a whopping $4.1 million from People for the first photos of their first biological daughter, Shiloh, in 2006. And Hello! paid an additional $3.5 million for the British rights to the photos. Where did all of that money go? The couple reportedly donated it all to African children's charities.

The Breakdown: She was the first biological Jolie-Pitt child. So, naturally, everyone in the world was gaga over her. Which is definitely why these photos were so expensive and when you add on the bonus of Jolie and Pitt's other children appearing in the photos, the price jumps way up. If People published between four and five photos, we could estimate that photos of Shiloh alone would run about $1 million each, while family photos would run around $1.5 million each.

Pax's first photos from his 2007 adoption went for significantly less cash than Shiloh's at $2 million. The photos were also sold to Hello! again, for an unspecified sum.

The Breakdown: The first photos of Pax featured only Jolie and her new 3-year-old son, which might explain the lower sum. (Previous and later photos featured the whole family.) Which would lead me to believe that the average price of the photos is somewhere between $500,000 and $1 million each.

The first photos of the Jolie-Pitts' twins in 2008 went for a whopping $11 million, an impressive sum that People and Hello! split to acquire the rights to the personal photos. Jolie and Pitt reportedly donated the entire amount to their Jolie-Pitt Foundation.

The Breakdown: By this point, the Jolie-Pitt clan was up to eight. And, while this shoot focused on the couple's newest editions, it also featured the rest of their four children. If the same rules as above applied to these photos, plus the fact that they are twins — we're looking at around $3 million per photo.

So, with those breakdowns, what would the average price for a photo of the Jolie-Pitt clan be for these wedding photos? Especially one like this that features Brangelina and all of their children being adorable?

Considering this is a huge and momentous life event and six photos have already cropped up on Twitter from People's "wedding album." It's safe to say that Jolie and Pitt made close to $20 million on this collaboration. (Anything more than that would be absurd, right?) So, on average, depending on whether or not there are more than six photos and the number of family members in each, the Jolie-Pitt wedding photos ran People between $2.5 million and $4 million per photo.

Personally, I think they're worth more, but even tabloids have limits.