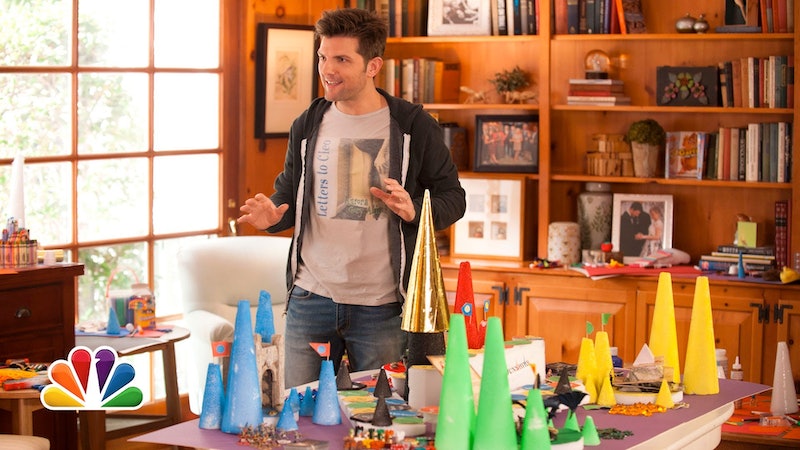 Oh, Ben Wyatt. Your cute butt and brief bout of unemployment brought us so many things: the world's shortest and most terrible claymation movie, the Low-Cal Calzone Zone, and most importantly, the insanely complicated game Cones of Dunshire. And now, one of these things actually exists beyond the world of Pawnee in Parks and Recreation. That's right, Cones of Dunshire is real. The fictional game was recently made into a real, playable board game, and the devoted nerds that brought the game to life are none other than Mayfair Games, the company behind the equally nerdy and complicated game Settlers of Catan.

How exactly did this come about? Well, the show originally contacted Mayfair Games to create a geeky game that they could write some jokes around — a little Settlers of Catan here, a dash of Dungeons and Dragons there — but Mayfair Games fleshed out the game for Gen Con, where 33 players entered with $100 each to play a huge version of the game with all proceeds going to charity. The position of Ledgerman was auctioned off at the event. One of the creators, Alex Yeager, described how they got into Ben Wyatt's mindset to bring the game to life:

It was fun to simply let loose and ask, as game producers, show writers and actors, 'If this game was created by a person with no sense of marketability, with no filter on the elements included, and no experience with game design, what would it look like?' The ultimate punchline for us, of course, is that now that game exists, and we hope that what the team at Mayfair has done is to be true to the spirit of The Architect (Ben Wyatt’s game design pseudonym), while still having a game that players will enjoy playing.

The Architect himself even made a video introducing this special version of Cones of Dunshire (only to be interrupted by Tom), and it's amazing:

The game isn't commercially available yet, but now that Cones of Dunshire has been publicly played, it would make a lot of sense for an at-home version to be released sometime in the near future. But until then, we can simply imagine how the game would be played in Pawnee, with some of your favorite characters from Parks and Recreation duking it out, board-game style.

April could very well win this game, if she wanted to. But instead, she will spend the whole game undermining all the other players, especially Ben (since she knows this game is so important to him). At some point, she'll probably just get bored and go make out with Andy.

Andy will start out the game with a lot of enthusiasm and even more questions, but that enthusiasm will soon turn into frustration as he begins to realize how ridiculously complicated the game is. After accidentally eating some of the game board pieces, Andy will get hungry and go get some pizza.

Leslie hates this game, but she will play it because she loves Ben and she knows playing Cones of Dunshire will give her ample opportunities for butt-admiring. Leslie will be really good at this game, just like she is at everything. But eventually, something from work will come up, and she'll end up trying to work and play the game at the same time, losing the game in the process. Of course, unable to admit defeat, Leslie will demand a rematch.

If Tom somehow gets dragged into playing this game, he will spend the entire time on Twitter, not paying attention. Once he realizes he's losing, he'll whine and find the first opportunity to quit the game and go shopping.

Donna is not playing this game, she's got a date with a fireman and a hot tub, so byeeee...

Jerry is actually not invited to play, but he'll somehow show up anyway. Jerry immediately trips over the game board, upsetting all of the cones and splitting his pants. God, Jerry...

The Architect himself, of course, will spend this game in nerdy glee, continuously explaining the rules to a group of people who will never care about it even half the amount that he does. He'll probably appoint himself the Ledgerman, since it "just wouldn't be fair" for him to engage in gameplay.

Ron will spend the majority of the game doing nothing, sitting in silence with a glass of scotch, and seemingly not paying attention. But in the last round, Ron will make one move and win the game. Ben will gets pretty upset about it.