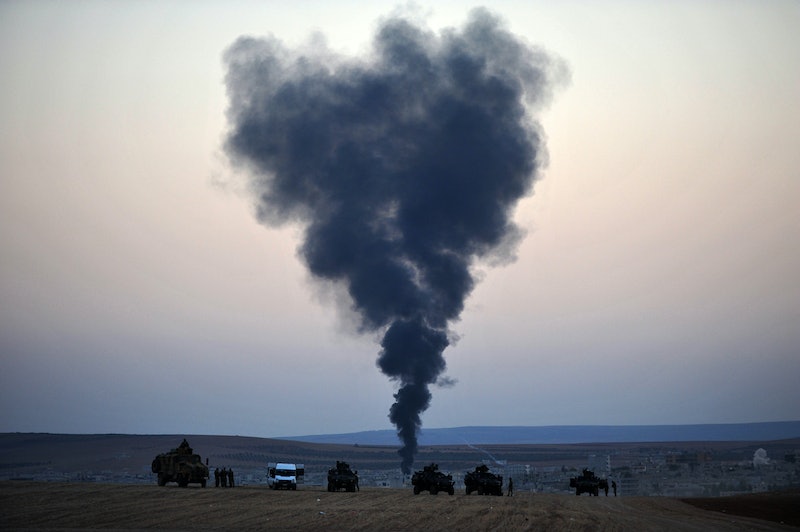 By now, we're all pretty familiar with ISIS, the militant Islamic group cutting a violent path through both Iraq and Syria. But in spite of their high-profile acts of terror — with the executions of American journalists James Foley and allegedly Steven Sotloff likely ranking as the most overt threat directed at the U.S. — there's a simple question that's on a lot of people's minds. Namely, what does ISIS want? With a little digging, you get a fairly clear picture. The stated mission goal of ISIS, as the group voiced publicly back in June, is to establish a new Islamic caliphate across the Middle East.

It's possible you've heard the word "caliphate" in the reporting on ISIS to date. Basically, it's the idea of an enormous Islamic state that encompasses all Muslims worldwide. However, as Vox points out, the sectarian forces of ISIS aren't counting Shia Muslims in that equation — only Sunnis. ISIS' desire (and apparent strategy) is to overthrow the existing governments of unstable, heavily Muslim nations and establish their own theocratic state in its place. The leader of ISIS, Abu Bakr al-Baghdadi, claims to be the "caliph."

To be clear, interpretations of caliphate aren't limited to the sort of bloodthirsty vision ISIS seems to have. As detailed in journalist Khaled Diab's excellent op-ed in The New York Times , the era of the Abbasid caliphate (from 750 to 1258 A.D.) was a time of relative diversity in the region, as well as dramatic advances in science and mathematics.

As The New Republic details, the organization's differing names across different outlets are actually of consequence here. You've probably noticed this. A lot of places, Bustle included, refer to the organization as "ISIS" (the Islamic State of Iraq and Syria), while President Obama calls it "ISIL" (the Islamic State of Iraq and the Levant). But the group itself has a different self-appointed title these days: Simply "IS," short for "Islamic State," which they adopted in late June.

So Why The Name Change?

The switch coincided with al-Baghdadi claiming the vaunted title of caliph. As Vox explains, the original vision of the caliph was that he was the inheritor of the prophet Muhammad's legacy in two big ways. First, he governs the Islamic State, and second, he claims responsibility for all Muslims worldwide. Over the course of hundreds of years, however, it ultimately assumed the form of a sort of imperial leadership position.

There are lesser strategic goals that ISIS has staked out along the way to forming their concept of caliphate. The execution of James Foley was, by their own claim, a response to President Obama's authorization of U.S. airstrikes against ISIS near the strategic Mosul Dam — which didn't halt the bombings, as Obama authorized further strikes last week. But controlling territory and infrastructure like the dam is really just a means to an end for ISIS. More stability means more recruitment, and more opportunity to conquer new lands, spreading their sphere of influence further and further.

Muslims Aren't Exempt From The Violence

The path to this full-fledged Islamic State is a very bloody one — at least, the way ISIS sees it. Asserting oneself as a caliph is a major and controversial path, and most Muslims won't submit to al-Baghdadi's particularly brutal interpretation of Islam. And ISIS' attitude towards such nonbelievers, Muslim and non-Muslim alike, is pretty straightforward: Either get on board or get killed. According to Human Rights Watch, ISIS killed nearly 200 Iraqis in Tikrit between June 11 and 14.

As for their short-term political goals, ISIS seems dedicated to stoking conflict with the U.S. — it's feared that they could turn attention to launching attacks both at America and Europe. This possibility has heightened tensions within the U.K. and U.S., and was echoed by Saudi Arabia's King Abdullah Saturday.

So basically: ISIS' ultimate plan is to take over responsibility for, and control of, the whole world's Muslim population — by force, if need be. And of course, that force has been in constant supply; stories of ISIS' grisly campaign throughout Iraq and Syria are consistently harrowing.

More like this
How To Follow The New Royal Family Social Media Accounts
By Sam Ramsden
Archie & Lilibet Are Eligible For Royal Titles — But There's A Catch
By Jake Viswanath
Is Queen Elizabeth II Or The Royal Family In Netflix’s 'Harry & Meghan' Docuseries?
By Jake Viswanath
Prince Harry Explains Why He Feels Guilty For Meghan's Estrangement With Her Dad
By Jake Viswanath
Get Even More From Bustle — Sign Up For The Newsletter