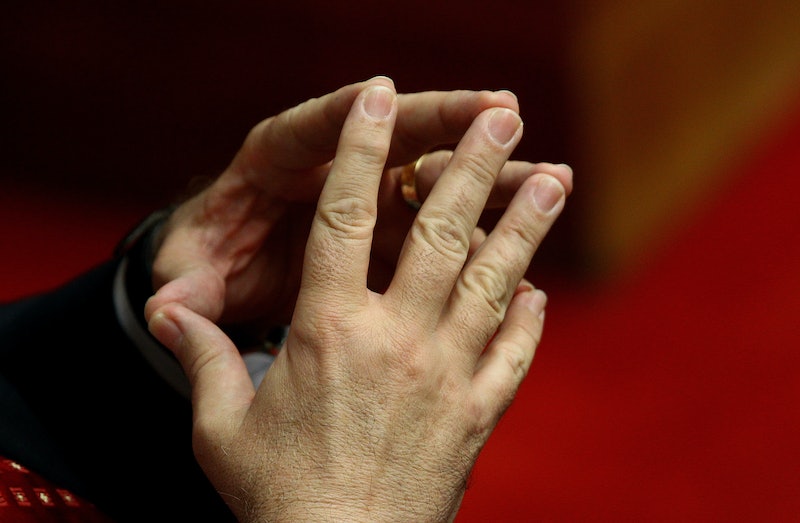 Women are alleged to have many external signs of fertility, like a good waist-to-hip ratio, but how can you tell if that hunk will be able to knock you up or not? A new study shows that longer ring finger length correlates to fertility in men: that's right, you can take an educated guess at how big a dude's balls are from looking at his hand.

South Korean researchers working in a team from several universities analyzed data from 172 men who were in the hospital for urology surgery. The lengths of their fingers and the size of their testes were independently measured during their stays. Surprisingly, both age and height did not correlate with size of testicles, but relative finger lengths did: the men with ring fingers longer than their index fingers had larger testes, and conversely the men with longer index fingers than ring fingers had smaller testes. Since larger testicle volume means more sperm production, that means that men with relatively longer ring fingers are more likely to be fertile.

Though it seems weird, judging people by their hands actually isn't just an exercise in archaic voodoo pseudoscience, like phrenology. In the second trimester of pregnancy, a mother's body bathes the fetus in heightened levels of testosterone. This testosterone comes to affect both relative finger length and some personality attributes and disease risk factors, in both men and women. Take a look at your own hand, specifically comparing the lengths of your ring and index (pointer) fingers. A relatively longer ring finger indicates the presence of more testosterone than a longer index finger and, as reported in Discover Magazine, is correlated with verbal aggression, athletic ability, sense of direction, physical aggression, and risk-taking.

Of course, pre-natal hormones aren't everything: other developmental and genetic factors affect how you turn out too, and many lifestyle factors impact fertility in men. Also, the study referenced above was conducted on Korean men, so the trend may be more pronounced amongst, or limited to, them. Still, it's fun to think about — maybe you can sneak a peek at your bossy coworker's hand to do some testosterone investigations of your own. And if you find a guy with big balls, be sure to confirm by looking at his hand too. For science.