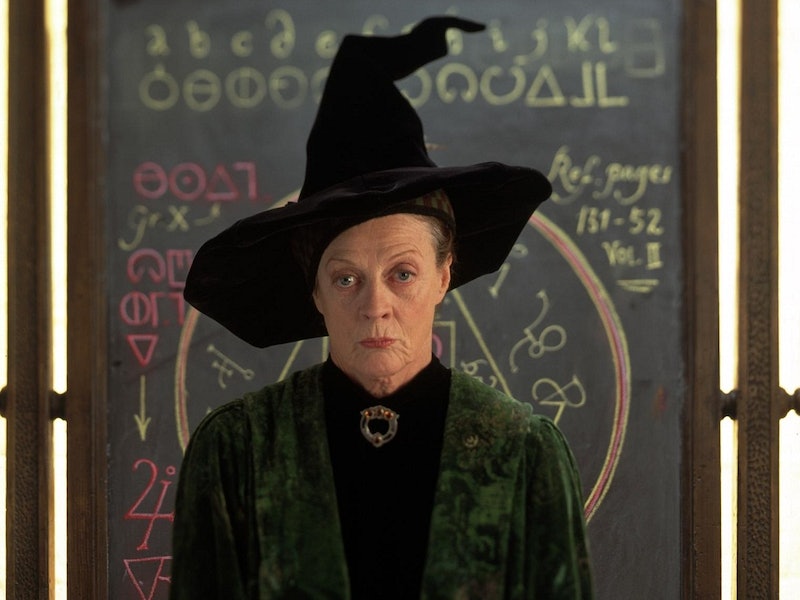 Even if you're not one of the millions of students who've just headed back to school, you'll always associate early September with those back to school rituals: getting your book list delivered by owl; a back to school shopping trip to Diagon Alley for supplies and maybe a new pet; hopping on board the Hogwarts Express where you'll catch up with friends and theorize about who the new Defense Against the Dark Arts teacher will be... OK, maybe that's what you just wish your back to school rituals had been.

Although we couldn't actually attend Hogwarts School of Witchcraft and Wizardry, after seven books that coincided with Harry Potter's seven (technically six) years of magical education, we certainly feel like we did. Die-hard fans of the series how to get into the Hogwarts kitchens, caretaker Argus Filch's deep, dark secret, all of the secret passageways in and out of the school, and of course, which teachers are the best — and which to avoid.

Despite many allusions throughout the series to the "vital importance" of education for young witches and wizards, Hogwarts exact teaching certification requirements and hiring policies are never explicitly revealed (unless you're Lord Voldemort. Then you are most definitely not hired). Whether profs end up teaching at Hogwarts because they know the right people, were in the right place at the right time, or have simply been there forever, the institution's scattershot approach to hiring makes for a rather eclectic faculty.

So how do Hogwarts professors stack up? Here now is the all-inclusive ranking of Hogwarts instructors, from worst to first.*

*Only professors who were portrayed teaching a class at least once in the course of the series are included on this list. Professors who are only mentioned, or appear in a non-classroom setting, are not ranked.

Subject: Defense Against the Dark ArtsTenure: Harry Potter and the Order of the Phoenix

Last place with a bullet, Senior Undersecretary to the Minister of Magic Dolores Umbridge takes her title of "witch" very, very seriously. Not only was she an intolerant, sadistic government toady who tortured students and abused her power during her Hogwarts tenure, she wasn't a very effective teacher. Much to the disdain and detriment of her pupils, Umbridge adhered strictly to a theory-based, Ministry of Magic-approved curriculum that eschewed practical application of Defense Against the Dark Arts techniques. (No word on whether this is a comment on the potential dangers of government involvement in education.)

Subject: Defense Against the Dark Arts

Tenure: Harry Potter and the Chamber of Secrets

So much beauty, so little brains. Gilderoy Lockhart is the Hogwarts equivalent of a college grabbing a celebrity professor to boost publicity and enrollment. Too bad he can talk the talk, but not walk the walk. With all due respect, Dumbledore, here's a pro tip: When hiring a teacher, make sure he actually possesses all the skills he is tasked with teaching to his students.

Subject: Defense Against the Dark Arts Tenure: Harry Potter and the Sorcerer's Stone

Note to self: if you want to be an effective teacher, do not let the disembodied spirit of Lord Voldemort possess your body for the school year. Side effects may include killing unicorns for their life-giving blood and trying to murder your students at Lord Voldemort's behest. Although we know much more powerful witches and wizards who have succumbed to Lord Voldemort, you would think that, as the Defense Against the Dark Arts teacher, Quirrell would have been a little more careful.

Call me a geek, but I always thought History of Magic sounded like a cool subject; I mean, witch hunts, goblin rebellions and giant wars are all exciting, right? Unfortunately, History of Magic falls victim to that classic school day trope — a good subject ruined by a boring teacher. With his monotone lecture style and inability to connect with and engage his students, it's no surprise that overachiever Hermione Granger was the only student able to stay alert enough to follow along. Even I would have fallen asleep before Binns could say, "Gargoyle Strike of 1911..."

In school, there's always the question of how to teach the unteachable — a subject that requires an inherent skill or inclination that not everyone may possess. According to Sybil Trelawney, Divination is just such a subject — students without precognitive abilities are pretty much SOL. Unless that's just her excuse for being a somewhat incompetent teacher. While Trelawney did indeed have Second Sight powers, based on her ability to make an accurate prophecy every 13 years or so, she unfortunately couldn't divine a method in her tea leaves or crystal ball for reaching the majority of her students, Lavender Brown and the Patil twins being the main exceptions.

After Trelawney was sacked by Umbridge in Order of the Phoenix, Dumbledore tapped the centaur from the Forbidden Forest to keep the crystal ball rolling. While Firenze's lessons were often just as opaque as Trelawney's, he at least acknowledged that his brand of Divination, based on star-gazing, is inexact and open to interpretation. Five points to Firenze for honesty.

Sure, this is kind of a low ranking for arguably the best overall Harry Potter character, but remember, this is about teaching quality, and in that, unfortunately, Snape did not excel. Prone to favoritism and bullying, Snape regularly had his students (with the exception of Slytherins, on whom he heaped praise) tied up in such anxious knots they were unable to learn and complete assignments. While I understand the reasons behind Snape's resentment issues, from consistently being denied his sought-after Defense Against the Dark Arts position to inadvertently causing the death of his true love, a truly dedicated teacher doesn't take out his bitterness on his students. Thankfully Snape had that whole "protected Harry because he always loved Lily" character arc to save him from being last on this list.

This one's even more of a heartbreaker. True, Hagrid is a lovable, loyal, big-hearted and brave friend, but he's also a rather inept teacher. His lesson plans lack coherency and consistency, and he regularly puts students in harm's way (try justifying a unit on Blast-Ended Skrewts to the Board of Education). And not to be nitpicky, but there's the not-so-insignificant detail of his expulsion from Hogwarts — dude only has a third-year level of education. But the most damning evidence of Hagrid's unfortunate lack of teaching skill? Even Harry Potter — who can count Hagrid as his first friend like, ever — couldn't bear to be in Hagrid's Care of Magical Creatures class longer than necessary.

There's a reason Slughorn falls squarely in the middle of this list — he's not a bad teacher, but he's not great either. Like other instructors, he's prone to favoritism, and even though our hero Harry Potter is the one getting the special attention, that's still not a good quality for a teacher to have. He's also a good example of how sometimes it's necessary to be judicious with information, even as a teacher. Although it's likely young Tom Riddle would have gotten the instructions for making a Horcrux elsewhere, it's possible a lot of trouble could have been avoided if Slughorn had kept the intel to himself. However, Slughorn's knowledge of Potions is serviceable, and his more relaxed teaching style allowed students like Neville Longbottom to demonstrate aptitude in the class for the first time.

Although Professor Grubbly-Plank only appears as a substitute Care of Magical Creatures instructor, it's evident that she has the edge over Hagrid. When she steps in during Hagrid's giant envoy mission in Order of the Phoenix, even Harry has to admit "he had just experienced an exemplary Care of Magical Creatures lesson and was thoroughly annoyed about it." Her lessons, involving unicorns and Bowtruckles, seem far better suited for her adolescent pupils, and she's not prone to emotional outbursts like Hagrid.

Professor Sprout, Herbology professor and head of Hufflepuff House, is another example of a perfectly competent Hogwarts instructor who doesn't get a ton of face-time (I guess aptitude in the classroom just isn't as interesting as ineptitude). Her lessons followed a logical pattern (students worked with increasingly difficult plants and herbs as their skill levels increased), she's always concerned about safety ("Earmuffs!"), and she can whip up a mean Mandrake Restorative Draught when necessary. One hundred points to Hufflepuff!

Considering how crucial charms are to wizarding, it's a relief that Harry Potter and company have a proficient professor like Flitwick. Despite his diminutive size (fun fact: Flitwick is half-goblin), Flitwick has an encyclopedic knowledge of charms and spells. He also has a patient but firm teaching style that fosters a safe, supportive learning environment, and understands that being sent flying across your classroom while teaching Banishing charms is just an occupational hazard.

Subject: Defense Against the Dark Arts Tenure: Harry Potter and the Goblet of Fire

Or should number three really be Barty Crouch, Jr., since the Death Eater was technically the one teaching all those Defense Against the Dark Arts classes? Either way, Harry and his classmates got a solid year of DADA training from the ex-Auror, including an introduction to Unforgivable Curses that would soon come in handy. Some argued that the lessons were too advanced for fourth-years, but Moody had his finger on the pulse of his students, and knew they not only could handle it, but needed it. And he taught us the most important lesson of all: Constant vigilance!

Subject: Defense Against the Dark Arts Tenure: Harry Potter and the Prisoner of Azkaban

Lupin came very close to being number one on this list. His brief tenure and propensity for indulging his students' mischief-making tendencies may have worked against him, but otherwise, he is hands down one of the best teachers Hogwarts has seen in recent times. Knowledgeable and thorough in his subject, encouraging and supportive of his students, Lupin gives his students the practical DADA skills they need, and the confidence to execute them. Not to mention the greater life lessons Lupin taught us about tolerance, acceptance, and bravery. His resignation at the end of Prisoner of Azkaban wasn't just a blow to Harry, it was a detriment to all future students who didn't get the chance to learn from him.

I don't know what kind of certifications other Hogwarts professors have, but Minerva McGonagall — Transfiguration whiz and Deputy Headmistress — definitely has her BA degree: Bad Ass degree, that is. Tough, no-nonsense, fearless and brilliant, McGonagall has clearly earned her place at the top of this list. She's the type of teacher any lover of learning craves — challenging but fair, someone who believes all of her students are capable of excelling, and always prepared with a well-placed zinger. McGonagall's been a staple at Hogwarts for many years; let's hope she never leaves.