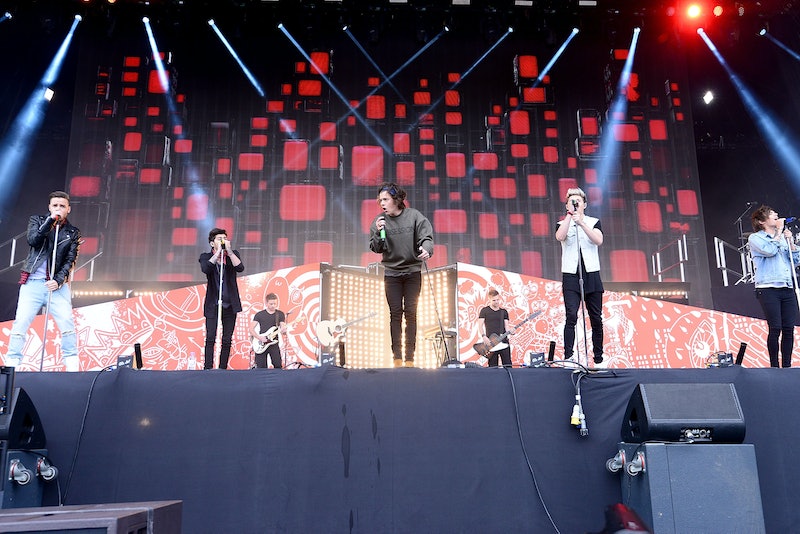 In the world of pop music, there's really no such thing as "too much hype." On Monday, One Direction band member Niall Horan continued to hype up the group's new album on Twitter, exclaiming, "Just listening to tracks from the new album. Jesus this is exciting! really can't wait for u to hear this album!" He even went so far as to call the new album his "favourite yet." That's a bold statement! Niall's comments are just the newest addition to the recent explosion of hype surrounding 1D's new album.

So, is the band getting ready release new music or something?

It certainly seems like it! Since 2011, the change in season from summer to fall has meant one thing and one thing only to One Direction fans: new music! For the past three years, the guys have released a new single in the fall, followed shortly by a new album — and 2014 doesn't look like it's going to be any different. With the rumored September 19 release date of One Direction's rumored new single, "One Chance to Dance," just around the corner, it makes sense that the band, and others close to their new project, are really starting to talk things up.

Now, some people get really annoyed when artists hype up their own music, but not me. It just makes me super pumped. Even if One Direction's new album ends up being a totally unlistenable musical fart (which I don't think is likely), hey, at least I had some fun while I was waiting!

In order to help you keep track of who said what and when, here is your official guide to all of the recent One Direction new music hype:

To begin, in March, British producer Naughty Boy tweeted this juicy tidbit about his studio time with noted One Direction dreamboat Zayn Malik:

We don't know for sure that Naughty Boy, Zayn, and British singer-songwriter Emeli Sandé were working on new music for One Direction, but I think it's a pretty safe bet.

In May, noted One Direction dreamboat Liam Payne posted this kiss off to the haters on Twitter (...with a side of album hype):

How could you not get excited when someone tells you that they're about to blow your mind? How??

Two weeks later, Naughty Boy told U.K. radio station Capital FM that Zayn is...wait for it..."quite a good rapper." So good, in fact, that when Zayn raps, he sounds like Drake! What is this feeling?

Things went quiet for a couple of months, but then, out of nowhere, Niall dropped a major bomb during the band's Today Show appearance in August, revealing that their new music is "a little bit more edgy" than what we're used to. Scandalous! Liam added that all of the guys had a hand in writing songs for the new album. Yes, things were gettting serious.

Just a few days later, probably in an effort to remind everyone that he's partially responsible for the band's massive worldwide success because he put them together as a judge on X Factor in 2010, Simon Cowell started getting really chatty about One Direction's new album. First, he said this on Twitter:

Then, in an interview with Capital FM, he gushed that the album is "fantastic" and that five or six songs could go on to become singles. Well, that certainly sounds promising, doesn't it?

And that brings us back to Niall's "Jesus this is exciting!" tweet. Whew.

We're only a little over two weeks away from the rumored September 19 release date of One Direction's new single. I suspect that we will be getting more details (and hype) in the coming days. Stay tuned!