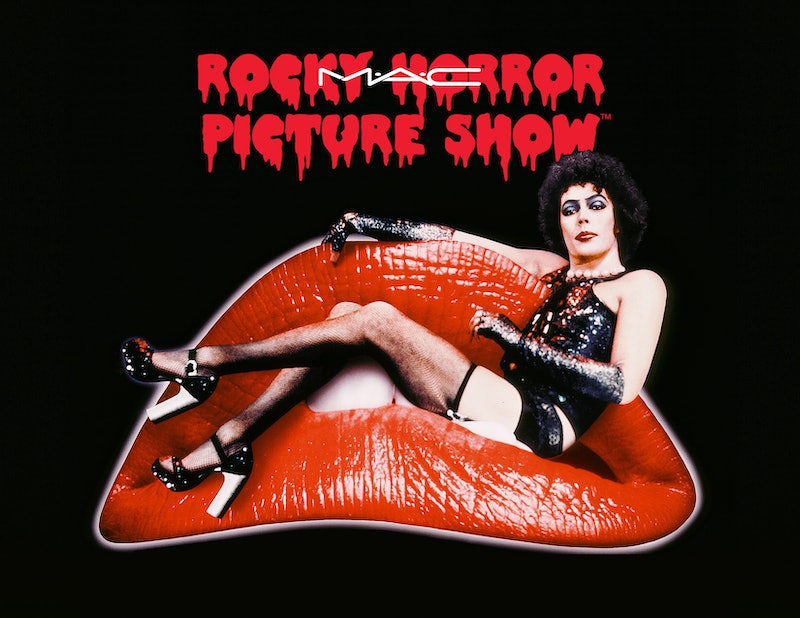 That beloved camp fest The Rocky Horror Picture Show is full of fabulous drag queens, sweet transvestites, and quirky, weird, and delightful characters. It's also my fave Susan Sarandon film. The Rocky Horror Picture Show has earned cult status through years of midnight showings. MAC Cosmetics, which prides itself on spotlighting edgy, uncommon beauty and crafting products for users of all sexes and races, is leading the celebratory charge for the film's 40th anniversary by doing what the brand does best. Yep, you guessed it. MAC is creating a Rocky Horror Picture Show-themed collection and it will be here before you know it, makeupistas.

Twentieth Century Fox Consumer Products and the makeup giant have partnered to launch products that will allow you to recreate the looks of characters in the film. OMFG! This is seriously amazing. Since the collection cruises onto MAC counters and online Oct. 2, it will arrive just in time for Halloween and may very well give you an idea for this year's costume. Are your Halloween wheels turning yet? They should be.

But even better, now you have products to wear to the local midnight showing of the film, too. You have to look your campy and vampy best when doing the "Time Warp."

You know you want to ape Miss Sarandon as Janet. Or Tim Curry's cross-dressing mad scientist Dr. Frank N. Furter, who is known for his bold eyeliner and lipstick? What about Magenta and Columbia, with their smoky eyes, red hair, crimson lips, and blushed out cheeks?

Weeeeee! This is already so much fun and we've only seen this teaser image of the collection. Check it out. It's amazeballs.

The MAC x Rocky Horror collection will include lipsticks and lip pencils, obviously, since the signature scarlet smacker from the opening credits and the logo is pretty iconic. The range will also feature a shadow palette, powders, blush, liquid eyeliner, lashes, glitter, and pigment, because of course it will, since a glitter-free Rocky collection would be uncivilized and unacceptable.

Executive producer Lou Adler is stoked about the film's 40th anniversary, noting: "It is hard to believe it has been almost 40 years since we released The Rocky Horror Picture Show, but as we approach this milestone anniversary, the film is as outrageously entertaining and relevant as it ever was. It has certainly taken on a life of its own, and continues to transcend generations and hold a solid spot in pop culture year after year."

Now you can mimic your fave TRHPS characters with loads of fun, fierce makeup. What a fantastic way to start the fall!

More like this
I Tried Marilyn Monroe's Makeup Tricks, & They're Pretty Genius
By Olivia Rose Ferreiro
10 Nail Trends That Perfectly Capture The Early 2000s
By Paris Giles
The Most Extra Party Girl Beauty Looks From The Early 2000s
By Paris Giles
Anne Hathaway Is Giving Major Princess Mia Vibes On The Cannes Red Carpet
By Sam Ramsden
Get Even More From Bustle — Sign Up For The Newsletter