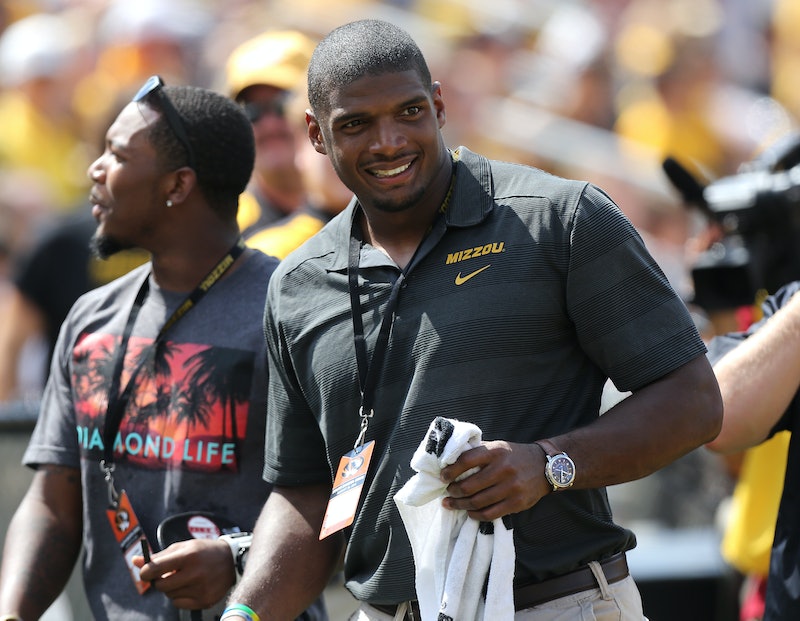 His chance of becoming the first openly gay NFL player was temporarily dashed when he was cut at the last minute by the St. Louis Rams on Saturday. But those hopes were revitalized when the Dallas Cowboys indicated they would sign Michael Sam to their practice squad. How's that for good news, y'all?

The Cowboys told NFL insiders that, pending a physical scheduled for Wednesday, the team planned on claiming the free-agent defensive end for its practice squad. Sam arrived in the Lone Star State Tuesday evening and spoke with The Dallas Morning News:

I’m excited to be to be joining Dallas, I just want to play football, it’s great to be heading back to my home state. … It’s been a roller coaster this past week but I’m happy where I’m at now. … I’m just looking forward to being a Cowboy, my focus is on making the team.

Sam's fledgling NFL career has been marked by speculation. From the draft to pre-season, he has been scrutinized for not only his ability to play, but the designation of becoming the first out NFL player. Rams coach Jeff Fisher said that he drafted Sam for "football reasons," as he should. Still, the speculation was thick that the former Missouri Tiger was cut because of homophobia or potential media attention.

In actuality, the Rams had some seemingly sound logic with cutting Sam. Their defensive line is solid, and the rookie has some work to do. Still, that didn't stop anonymous general managers from commenting that teams were scared to sign Sam because of the ensuing "media circus" that will follow the LGBT player.

To an extent, I'm sure that is true. It seems like the Rams remained well-intentioned throughout the pre-season, and I think Sam was cut for the same "football reasons" he was drafted for in the first place. But there are some pervasively homophobic attitudes that surround professional sports, and it seems likely that at least some teams would have a problem drafting an openly gay player, particularly while ESPN is obsessing about who he showers with.

But I can tell you with certainty that if there is one person who (rightfully) isn't intimidated by the media, it's Cowboys owner Jerry Jones. Jerry Jones doesn't give a shit about anyone accept Jerry Jones and his Cowboys. If he chose to give Sam a chance, then he did it because he is spotting untapped talent and for no reason other than that.

Bravo to the Cowboys for not being idiots.

So yay! Good for you, Michael Sam! Good for you, Cowboys! All hail Jerry Jones, God of Football. But Michael, dear. I get that this whole period has been an emotional roller coaster, and it's totally fine to shed some public tears. But we need to work on this.