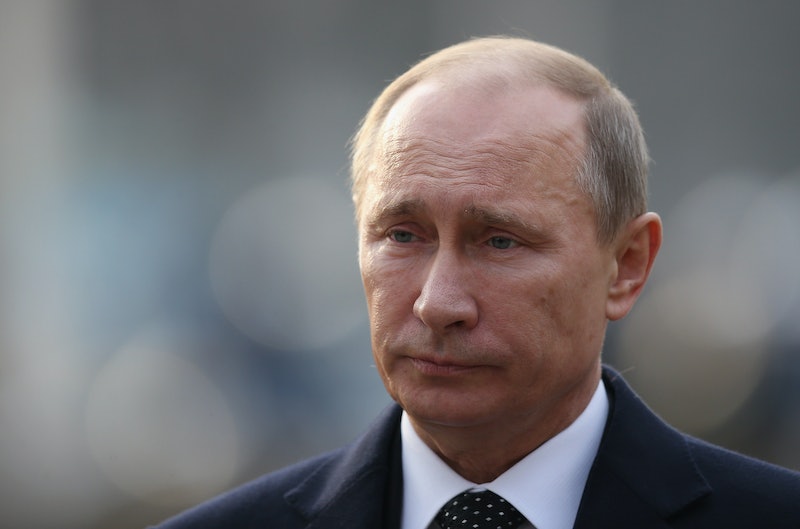 After a considerable amount of back-and-forth, Russian President Vladimir Putin announced Wednesday that he and Ukrainian President Petro Poroshenko have reached an understanding and agreement on a seven-point plan to end the Ukraine-Russia conflict. Hmm. Should we trust information from the man who two days ago said that he could "take Kiev in two weeks"?

It seems, as per usual, Putin is the one leading the charge on this one. There has been little direct information from Poroshenko throughout this process, and in fact the Ukrainian president's office retracted a statement made earlier on Wednesday that said the unlikely duo had reached a "lasting cease-fire," according to The New York Times. Meanwhile, the Kremlin is still holding onto that idea that it has absolutely nothing to do with the pro-Russian separatists, so while it didn't negotiate a cease-fire per se, Putin did agree with Poroshenko and, you know, outline a seven-point program to make this happen.

Thanks, Putin! I'm sure this diplomatic appeal will totally make everyone forget about what President Obama called a "brazen assault on the sovereign territory of Ukraine."

Obama, speaking at a press conference in Estonia, wouldn't gauge how serious the cease-fire talks are just yet, and said, basically, that it is hard to take Russia seriously when it is actively sending troops to Ukraine and calling them separatists.

It does seem mighty convenient that this happens right before the NATO summit in Wales, where the conflict was sure to be front-and-center, but here is Putin's seven-step plan that he sketched out on his flight from Moscow to Mongolia. An aide handed him a notebook that he read these out of at a press conference. Putin assures us he and Poroshenko share "very close" views on these steps:

1. Militias should cease military advances in the Donetsk and Lugansk Regions.

2. Pro-Kiev armed forces should withdraw to a distance that excludes the possibility of shelling settlements.

4. Exclude the use of combat aircraft against civilians and villages.

5. Prisoner/captive-exchange via an ‘all-in-all’ formula, without preconditions.

6. Humanitarian corridors for refugees movement and delivery of humanitarian aid across Donetsk and Lugansk Regions.

So, will it hold? It would be a little more comforting if we heard from Poroshenko directly, rather than Putin acting as the sole source of information.