Have you ever wondered exactly who or what 4chan is ? If you have, hopefully it didn't happen on, say, national television. Otherwise you might end up looking silly, like CNN technology analyst Rick Larson, who said on air Tuesday that 4chan "may have been a system administrator who knew his way around and how to hack things." Well, that's a little awkward.

It's gotta be a particularly embarrassing flub for Larson, who ostensibly earns his paycheck on the strength of his tech expertise. Still, it goes to show how wide and deep Web culture is, and how there's always something lurking that otherwise well-informed experts may not comprehend. In the case of Larson, he was being asked about 4chan by CNN's Brooke Baldwin due to 4chan's alleged involvement (or, the involvement of a 4chan offshoot called AnonIB) in the massive celebrity photo hack that went down over the weekend.

And in answering Baldwin's question — "who is this 4chan person or website?" — he seemingly got caught unaware.

Ouch. Seeing as 4chan pops up in the news from time to time, especially as related to social media, maybe a refresher is in order. Here's a brief rundown on what 4chan is, and what they've done through the years. 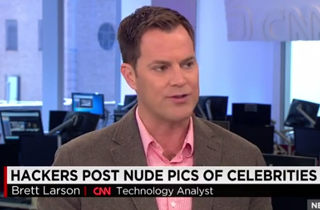 4chan is a No-Frills, Zero-Accountability Message Board

As Vox details, 4chan was launched back in 2005 by a then-high school sophomore in New York state named Christopher Poole, a former poster of the Something Awful forums — a similar (though less anarchic, in the long run) depository for internet humor, memes, and, occasionally, grossly inappropriate content. The 4chan moniker is a reference to the Japanese anime site 2channel, but at this point, it's probably outpaced its namesake in terms of recognition.

One of the reasons 4chan's anything-goes mentality has been so reliable over the last many years is that there's no registration for the forum, allowing users to either post entirely anonymously, or to generate an instant username when writing a post.

Opinions about 4chan tend to run pretty hot — just type "4chan" and "cesspool" into Twitter and watch it go.

So, What's the Problem With That?

The pervasive anonymity 4chan affords, paired with the occasionally amoral (or overtly immoral) views of its users, has led to myriad problems in the past. As detailed by the Washington Post, 4chan has had a troubling history of child pornography, in addition to random acts of villainy: bomb threats, fake social media campaigns designed to exploit unsuspecting users — which is what #LeakForJLaw is, by the by — and prevalent misogyny and racial slurring.

A great example of 4chan's problematic impact was exposed back in June, when feminists (primarily women of color) began publicizing an apparent 4chan infiltration effort using the hashtag #YourSlipIsShowing. As it turns out, numerous Twitter accounts ostensibly belonging to social justice activists were actually seemingly being run by 4channers and so-called "men's rights activists" in an attempt to make other, real activists look back. In essence, they were trying to build their own straw men — or straw women, more accurately.

OK, OK, But is Misogynist Trolling Such a Big Deal?

Not necessarily, actually, but sort of. Basically, as Gawker explains, the hacks may have originated from a different message board, which splintered off from 4chan back in 2006, called AnonIB. AnonIB stands for "anonymous image board," for just the reason you'd guess — users can post whatever images they want, safely shrouded from identification. AnonIB is riddled with pornography, and much of the most troubling stuff is posted in the /stol/ section, which as you may have guessed means "stolen" — hacked or leaked nude images of hapless women.

Days prior to the massive leak, Gawker discovered, an AnonIB poster seemed to suggest some /stol/ users had some high-value images on hand — "hoarding big win," in a turn of phrase guaranteed to make you feel slimy.

It's since been suggested, as detailed in The Independent, that the photos may actually have been stolen some time ago, and been used in a tightly-knit nude photo swapping ring — basically, everything you could think to make this story as gross and violating as possible.