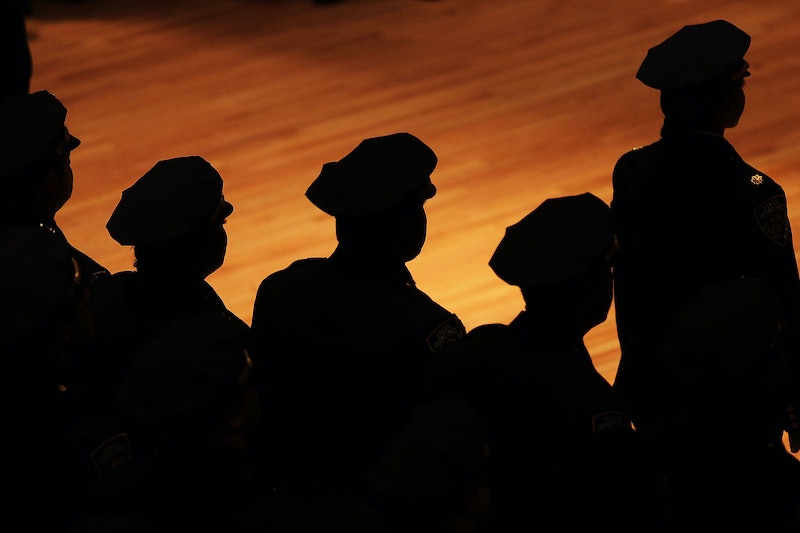 School is now in session, but we're not talking about kids. Nope, the NYPD is hitting the books. The department is forcing its officers to take lessons in something kids could practically teach: social media. After a series of embarrassing blunders this year, top NYPD officers are attending "Twitter school" at John Jay College to learn how to use the social media platform more wisely — that is to say, to their advantage rather than to their detriment. Simple stuff.

According to information obtained by the New York Post, the classes include a memo titled "Use Common Sense" (which I sincerely hope included rudimentary picture diagrams, like a cop taking a selfie at a crime scene with a big X over it), suggestions of what to tweet — traffic info, street closures, crime states, wanted posters, promotional info on community groups — and what not to tweet — jokes about dead people and just about anything that initially pops into their heads.

The schooling comes after the NYPD enthusiastically — if not perhaps too eagerly — joined the 21st century earlier this year by launching initiatives to expand its presence on social media. Perhaps it was a case of simple generation gap that led to the cringe-worthy tweets. But these weren't your clueless dad fails that embarrassed you and your sister, like when he tried to join Friendster 12 years too late — the NYPD's social media fails made an entire city uncomfortable.

In April, the NYPD excitedly launched an innocent Twitter campaign that welcomed NYC residents to share photos of police officers using the hashtag #myNYPD. This is what they had in mind:

However, this is what they were flooded with instead:

Despite this clear fail of monumental proportions, NYPD Commissioner Bill Bratton argued that it was no such thing. At the end of the day, he said, he was happy to receive the "extra attention."

In March, Bratton announced that every precinct in the city would have its own Twitter handle and account. But it was a responsibility that clearly not every officer was ready to handle. In July, a woman was killed after falling onto the subway tracks. Captain Thomas Harnisch of Harlem used his personal account to tweet a story of the death to street safety advocate groups, who have long had conflicting agendas with the NYPD, along with the caption, "Let me guess, driver's fault right?" The tweet has since been deleted.

After being (rightfully) criticized by street safety advocate Keegan Stephan, Harnisch then took to the 25th Precinct's official Twitter to fire back this response: "Isn’t that what you do? Seize on a tragedy and assign culpability having no facts? To further your agenda?" That tweet has also been deleted.

Sigh. It hope he's one of the officers attending Twitter school, and I hope he's taking notes.