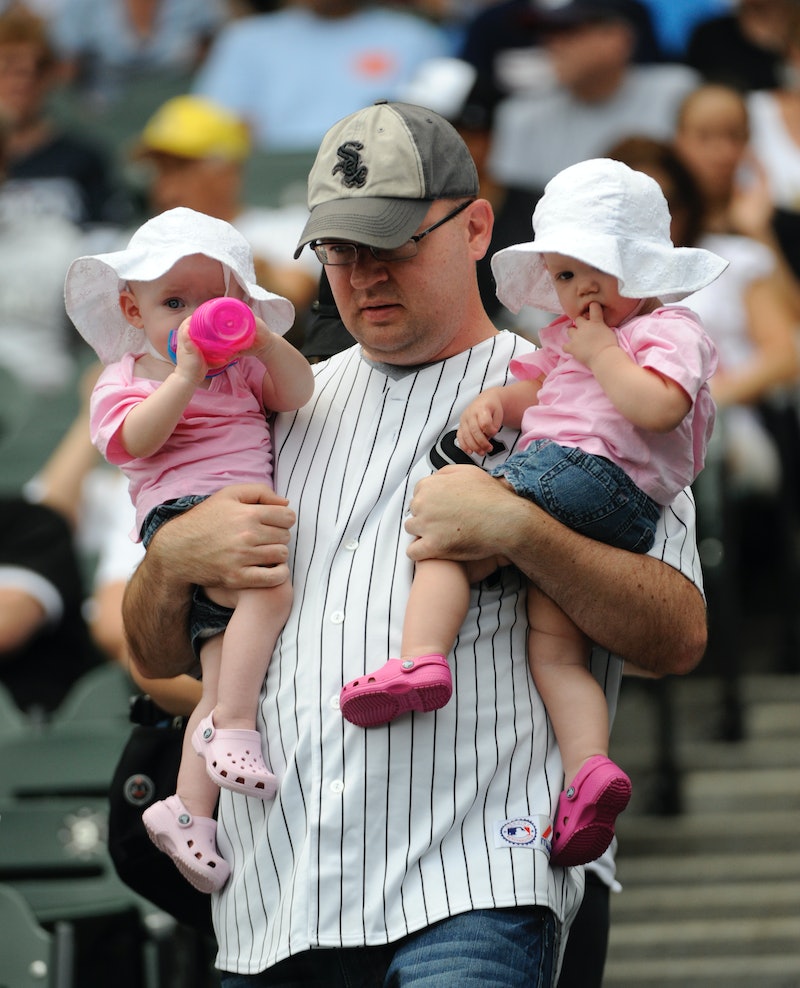 Having kids is like taking acid: It doesn’t change you– it just shows you exactly who you are. (And also, it lasts longer than you would ever want it to, it can take you to really dark places, lead to you profound truths about the universe, and make you unbearably annoying to be around.) When your friends go off and knock each other up, your relationship with them is bound to change. Exactly how that change looks, however, is up in the air. But generally speaking, your friends will morph into one of the following people after becoming parents.

They don’t return texts. They haven’t been on GChat in weeks. Their birthday came and went and they didn’t even post an obligatory “Thanks for all the loooove!” on Facebook. THEY HAVEN’T INSTAGRAMMED A SINGLE FUCKING THING IN A MONTH. Did they die? Did they merge with their baby to form some reclusive, friendless blob that smells like diaper cream and makes mechanical breast pump clicking sounds in place of words? You keep rubbing every Diaper Genie you see, hoping they’ll pop out and exist again.

This person, perpetually torn between their genuine desire to maintain their friendships and the all-consuming nature of having a child, makes and breaks plans with endearing regularity. At a certain point, you stop even putting plans with them on your iCal because you know they will never materialize. But you always play along with the fantasy that you might actually spend time together because, let’s be honest, the belief that a hang-out will come to fruition is the light that sustains people during the bleak vortex days of new babyhood. This mutually indulged fiction is the greatest kindness (other than bringing food; always bring food) that a childless person can do for their parent friends.

The “Wait – Where Is Your Baby?” Parent

The bewildering opposite of the Flaky Parent, this breeder buddy somehow has all kinds of free time and generally appears inexplicably unencumbered by their child. It’s like they popped into the hospital, dropped a shorty, and then bopped over to brunch with a flawless manicure and a devilish look that says “Just one more mimosa. We deserve it.” Like, it’s great to have you around, friend-o, but where the hell is your fresh offspring?

“Gosh, I’m so boring now! I’m all totally in love with my kid like a complete, hopeless lame-ass. Haha, can you even believe me? Like, am I kidding with this shit? *Sarcastic mocking voice* Oh yeah, look at me, staying home at night to research preschools and make organic squash puree because I care sooooo much about my dumb kid’s nutrition. Ugh, who even am I, right?” You just want to pat them and kiss their forehead. These people are the adorable best.

On the rare occasions when you see them, it’s usually for dinner at their place, the first half of which involves you standing around, sipping the wine that you brought, awkwardly pretending to be riveted by their DVD collection as they go through their kid’s bedtime routine (it gets way realer than you expected.) The second half of the night is spent reassuring them that you’re having a great time as they exhaustedly hunch over their overcooked pasta, apologizing for the appearance of the house, and forlornly asking for updates from the outside world. Spending time with them is basically charity and you always need a strong drink or five after a few hours with them.

Parenthood has been proven to do very little to make materialistic people less so. They just replace designer clothes with whatever $900 stroller Natalie Portman had, and continue letting their superficiality flag fly. If they’re going to be forced to spend money on someone other than themselves, they’re damn sure going to find a way to self-validate in the process. Baby or no baby, maybe it’s time to question why you’re friends with this person at all.

Every conversation you have with this person will inevitably work its way back to the same bottom line: your life doesn’t mean anything of substance until you procreate. All of your concerns, goals, joys, and sorrows are merely empty distractions. You won’t really find your purpose in life until you live it in total service to a needy, fragile little bag of fat and poop. This belittling tone will continue for, uh, the rest of eternity (or until you have a kid of your own, at which time they will assume that you share their condescending perspective on the rest of your poor, hollow, childless friends.)

Soooo, they have a kid now, and appear to be happier than ever. They might be fooling everyone else, but you’re not buying this farce for one goddamn second. The cynic in you (aka, the whole you) fights the urge to rummage through their medicine cabinet because clearly this FAKE happiness is pharmaceutically induced and you want some of whatever kind of potent mood elevators they’re having. (Or maybe they actually love their kid and the adjustments in lifestyle somehow feel natural and positive to them. Whatever.)

Oh, you did squeezed out a person and now you understand Life? PLEASE SHARE YOUR WISDOM, YE SUPPLE-WOMBED SOOTHSAYER. Look, it’s not that you don’t respect that anyone living an examined, thoughtful life will derive insights of varying degrees of profundity from their experiences. Undoubtedly, some serious existential feels will be brought about by creating a new life. You get it. It’s all cool until the words “you’ll understand when…” enter the conversation. You simply canNOT with all that (and we don’t blame you.)

No one is saying that you shouldn’t strive for a healthy kid/life balance. Go out, see your mains, shake what your c-section gave ya – do you. But there’s no need get all the way turnt on a Tuesday just to prove that you haven’t caught a case of the Olds. Nothing screams “I’M AMBIVALANT ABOUT MY LIFE CHOICES” more than a parent who shuts down the bar every night.