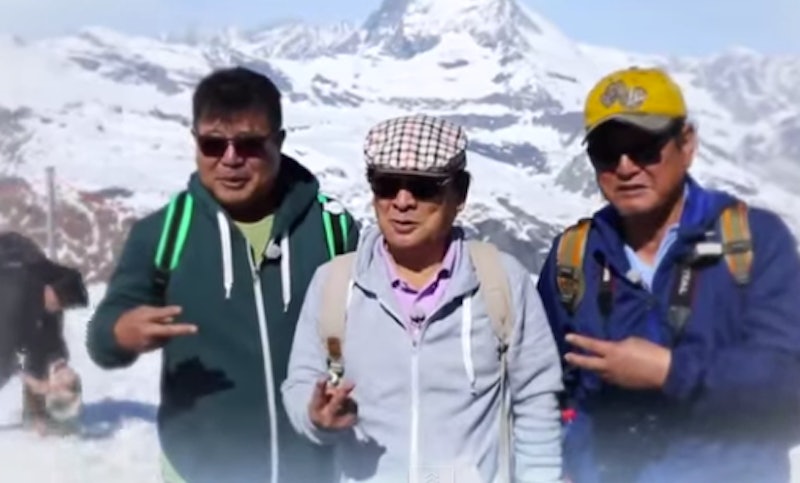 And now, what you really wanted: a show about traveling grandpas...because you're only as old as your itinerary! Entertainment Weekly reports that NBC will adapt a South Korean traveling show about grandpas who get global. The original South Korean show was called Grandpas Over Flowers, and your guess is as good as mine if that's a literally minded title ("they will sleep over flowers because they are creatures of nature!") or a metaphor for flying above the clouds in an airplane or lying in a graveyard — not to be morbid or anything, but we all know that a show about traveling grandpas is really just a big cry of "YOLO," grandpa style. The American version will be called Better Late Than Never, so really, it is about YOLO-ing it up. And hey, who says you're too old to take up backpacking, anyway?!

According to Variety, the American Version will apparently feature four reputable actors as they backpack throughout Asia with a young porter. It remains unknown as of now who these actors will be (and who this fine young porter will be), but it's fair to assume that they're looking to revitalize their career via reality television because careers can similarly follow a "better late than never" mentality, right?

But if the show is anything like the trailer for the South Korean show (which calls it "the most adorable journey"), then it will be pretty great. If you like old men bonding together through travel, then by all means. YOURS. But if only it was called The Brotherhood of The Traveling Grandpas. IF ONLY.

You can watch the original South Korean trailer below, and see if it gives you any ideas about what the American version might be like. It's got great music, for one thing. And it's also got this great moment:

To restate: he'll think about it..if you get him a private jet. Oh, grandpas!