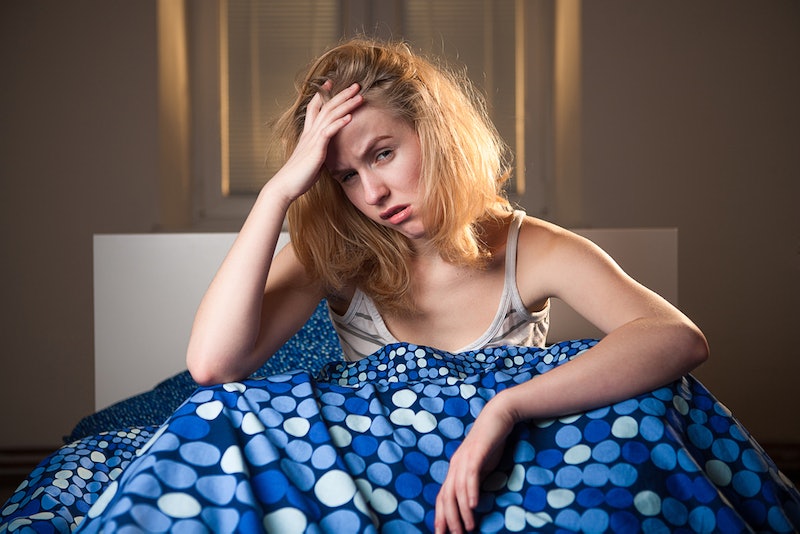 Despite Hollywood's version of the situation, a woman's struggle as a sex-haver extends beyond trying to not endearingly fall off the bed while attempting to transition from "adorable" to "hot" at the end of the third date. And sex-related problems are not — brace yourselves — exclusively about whether or not a penis gets acceptably hard.

In general, the awkward aspects of heterosexuality (which is largely what this list will be based on because I mostly bone dudes, although some of this will undoubtedly be universal among all women), as Hollywood presents them, can essentially be reduced to two questions: Is the woman pretty enough, and is the man manly enough? Clearly, that's an impossibly limited perspective that not only barely scratches the surface of real life, but projects some truly lame stereotypes about how men and women are supposed to behave in sexual matters.

I'll wait a moment while you recover from the complete and total shock of learning that movies and TV shows don't offer accurate depictions of sex and gender.

So yeah, being a lady in the sheets involves more than laying our lingerie-clad, hole-filled body on a bed like a docile lump of willing swiss cheese. Being a sexually active woman is weird and gross and frustrating at times (but also, despite the topic of this article, completely awesome and fun.) Here's a small sampling of what we endure:

Wondering if you're wet enough

Whether it’s the first time or the hundredth, when it’s Go Time, we want there to be a perfect little flood in Ladytown. Having someone head downtown to find the river done run dry is undoubtedly the female equivalent of failing to get hard. It’s pretty much a flaccid vagina. If just reading the words “flaccid vagina” gave you the sads, you now understand a fraction of what it feels like to experience it in real life.

The fear is real. Especially those juicy, post-sex ones that sneak out right when you think you’re in the clear. Those are like eating a delicious meal, and just as you’re sitting back in satisfaction, someone pukes on the table. Unless all parties present are decidedly chill, some of the magic is retroactively killed.

When you discover a dealbreaker mid-coitus when it would be too awkward to bail, but your ladyboner is dead

The rage. The heartbreak. It’s the most you will ever literally want to punch the top of someone’s head. Look dude, clear instructions were given. Do the words “Right there, that’s amazing, don’t stop” mean nothing to some people? We mean right there, do not stop. Millimeters can mean the difference between having an orgasm and making out with vaj-breath for the rest of the night for no goddamn reason.

Spending big bucks and a whole day on waxing, lingerie, and a pedicure only to end up boning drunk, in the dark

You’ll be a mortal, flawed, hungover monster by morning. You had a brief, glorious window of sex goddess perfection and your romp-mate missed it entirely. You’re a busy girl, and this degree of sex readiness does not happen by itself. A little attention should be paid, is all you’re saying.

Hey, pal. You come, I come. Maybe more than once if our bathing suit areas are vibing on each other especially hard. That’s how this works. Enough of this mentality that women’s orgasms are acceptably passed over. We get it — vaginas are complex. You signed on for this task when you got naked with us. Fact: People who are selfish in bed get reincarnated as herp’ sores.

When that “reach for the nightstand” moment comes and the dude is like, “Oh, I don’t have any condoms”

And honestly, worse than a guy not having a condom is that infuriating split-second pause wherein he looks at you to gauge whether or not you’re down to clown anyway. Like, great, now I think you’re possibly a douche and I have to walk down to the bodega with sex hair.

Having no idea what’s trendy in pubic hair these days

I feel like 10 years ago, we were all scorching the earth (those were dark days) but everyone seems to be doing something different now. Which, ya know, respect. Everyone should be poon-coiffing per their own personal preference. But still, I want to know what the cool kids are doing. Ombré?

All of our birth control options are weird as hell

I mean, think about this: We can either put a little cap on our cervix, let basically a fish hook live in our uterus, walk around with what looks like a rave girl’s rubber bracelet chillin’ in our vagina, or pop a pill every day that plays god with our hormones. Refraining from getting knocked up is only a slightly smaller shit show than pregnancy itself.