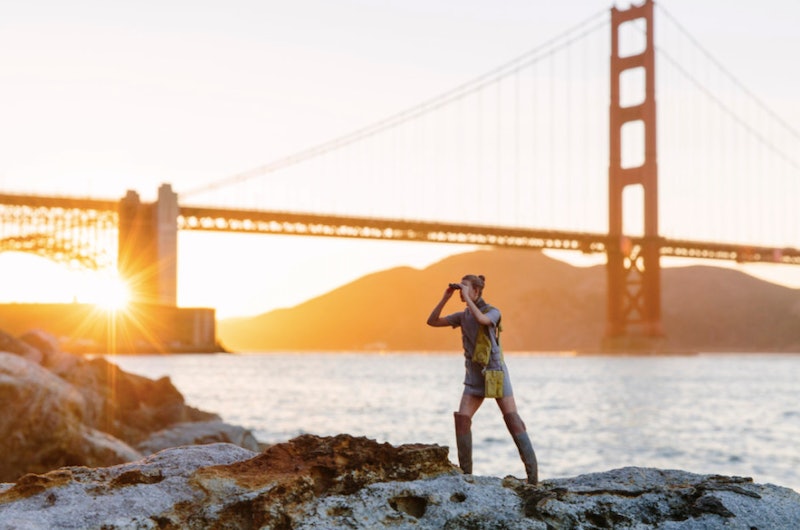 Karlie Kloss has been traveling the world. The Victoria’s Secret Angel/super model/Taylor Swift’s BFF has been spotted posing for photos in front of Stonehenge, the Golden Gate Bridge, and Niagara Falls, among with 24 other famous landmarks and cities. But — after taking a closer look— the photos aren’t actually of Kloss. Or, they’re not actually a person at all. Vogue created a band of super chic of Karlie Kloss 3-D dolls and sent them all over the globe and out of this world (literally— one of the dolls went to the moon.)

The first photo was taken in San Francisco, where Karlie rocked an Alexander Wang bag in front of the Golden Gate Bridge. The journey took 50 dolls to 22 cities in 80 days. There were also 13 faux-limbs broken and three dolls went MIA. Talk about a bumpy ride.

Sure, "Karlie" covered quite some ground in her journey, but there are still a few destinations we wish she crossed off her bucket list. In order to for Kloss to have a little more American fun, we offered her 5 destinations she should see on her next trip. If Mini-Karlie ever needs a travel buddy, just give us a call!

But first, a look at some of the awesome photos from the shoot.

Head over to Vogue.com to see the rest of the images — trust me, they're stunning. And now, some other places I'd like to see mini Kloss visit.

In any state, really. After all, what model doesn’t want to treat herself to a corn dog once in a while? Plus, the thought of Mini-Me Karlie modeling in front of a Ferris Wheel? ADORABLE.

Speaking of rides and adorable things… why didn’t Kloss make a stop at the Happiest Place on Earth? She could have totally worn a tiny pair a mouse ears while Mickey and Minnie held her in front of Sleeping Beauty’s castle. Swoon.

The Eldon, IA landmark isn’t too far from Kloss’s hometown of St. Louis, MO. And because the house allows tourists to dress up as the couple in the painting, we’d get to see Kloss look vintage but fab.

Ugh. We actually missed an opportunity for Beyonce to hold Mini-Me Karlie as she performed the most badass Super Bowl halftime show in history. Maybe next time…

Can you imagine Kloss looking fabulous and smizing in front of Washington, Jefferson, Lincoln, and Roosevelt? As Tyra would say, fierce.